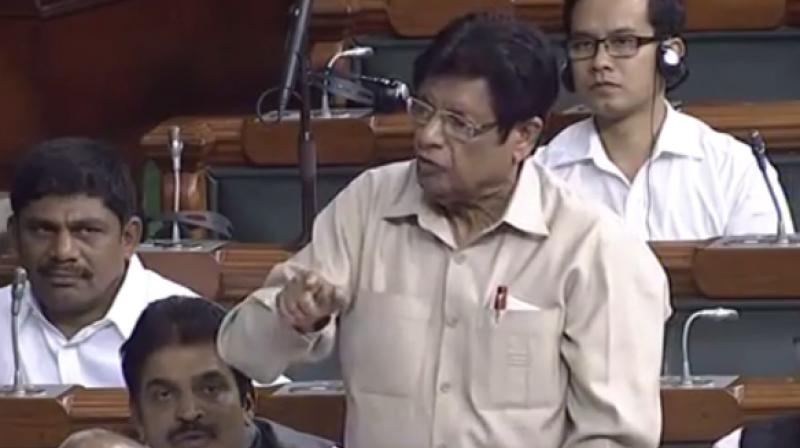 New Delhi: Congress and Left today raked up inside and outside Parliament the issue of death of IUML MP E Ahamed, alleging that he was shown alive under PMO "pressure" to allow Budget presentation on February 1 and demanded a probe by a Parliamentary Committee into it.

While raking up the death issue, the members from Congress and Left forced premature adjournment of Lok Sabha for the day as they created ruckus by alleging that "ill-treatment" was meted out to Ahamed's family members at the government hospital after he was admitted there on January 31.

78-year-old Ahamed collapsed during President's Address to joint sitting of Lok Sabha and Rajya Sabha on January 31. He was declared dead in the wee hours of next day, hours before presentation of the Budget. The issue was raked up in both the houses.

In the Lok Sabha, the Opposition members trooped into the Well, raising slogans over Ahamed's death and disrupting the proceedings. The uproar led to two adjournments before the final for the day at around 1.10 pm.

"The body was kept there in inhuman way. His daughter and son-in-law too were not allowed to meet for six-seven hours...This all shows that how the government shrouded such big incident to ensure the Budget is presented," said Leader of Congress in Lok Sabha Mallikarjun Kharge.

Kharge, accompanied by Congress MPs including Jyotiraditya Scindia, claimed Ahamed's body was kept at RML hospital to send out message that "he was still alive".

"The government indirectly pressurised the doctors and kept the body there," he said, adding even Congress president Sonia Gandhi, Rahul Gandhi and other senior leaders of the party were not allowed to even see Ahamed's body.”

"We demand the government should issue a statement in this regard and a Parliamentary Committee be formed to probe it. Whoever is responsible, be it doctors, government officials, the ministry, the responsibility should be fixed."

Scindia, while raising questions over the entire episode, said, "Daal mein jaroor kuchh kala hai aur is liye hum jaanch ki maang kar rahe hai (There's certainly something fishy and that is why we are demanding a probe)."

CPM's P Karunakaran was heard telling Union Parliamentary Affairs Minister Ananth Kumar "it is not the issue related to Budget, but what happened in the hospital?"

Premachandran said, "Madam Sonia Gandhi had to wait for two hours in the hospital and they were pointing out protocols."

Leader of Opposition in the Rajya Sabha Ghulam Nabi Azad said the Congress was information that Ahamed had passed away "much earlier" than it was formally declared, but the government wanted to keep the body in hospital until the Budget was presented.

In Rajya Sabha, CPM leader Sitaram Yechury also demanded a probe into the manner in which Ahamed's death was "handled". Raising the Ahamed issue during Zero Hour, Yechury said there are various allegations and various information that "I have got that some doctors say he was declared dead when he was taken to the hospital".

Some say Ahamed died subsequently in the ICU, he said, adding that later he was shifted to trauma centre saying there are better facilities.

"I want a proper and thorough investigation into the manner in which death of one of our senior colleagues of Parliament and former Minister E Ahamed was handled and the way in which news of his death was sought to be suppressed," the CPI(M) leader said.

"There has been interference, that's what I hear, from the highest authorities in the country from the PMO and this is something which cannot be accepted. This is shameful.”

"I want this issue to be thoroughly investigated. I wish my information is not correct what I heard. But if it is correct, then they must be made accountable and action must be taken against those who have behaved in this manner," Yechury said.

The Rajya Sabha MP also argued that a person cannot be put on life support without permission of nearest relative, and wanted to know "how was announcement of death delayed".