Of the latest 187 Covid samples tested, 152 had Omicron and 8.5 per cent had Delta, he told the Delhi Assembly 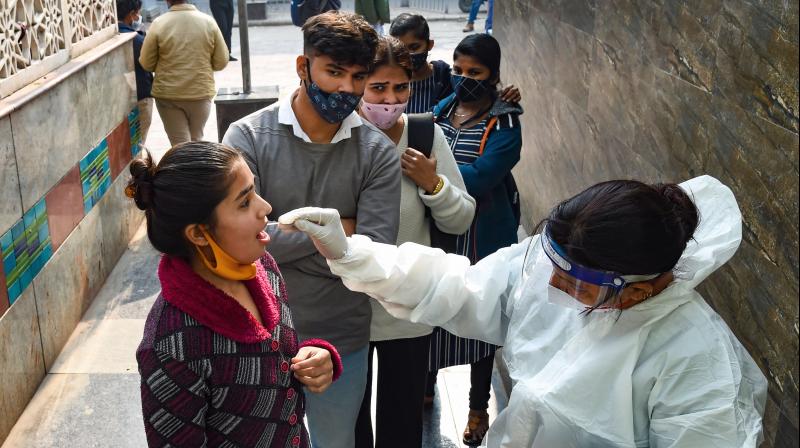 A health worker conducts COVID-19 testing of a woman amid concern over a third wave of the coronavirus pandemic in India, in New Delhi. (Photo: PTI)

New Delhi: Delhi Health Minister Satyendar Jain on Monday said the latest genome sequencing report shows Omicron has been found in 81 per cent of the samples tested and the new variant of concern is the reason behind the surge in coronavirus cases in the capital.

"So, Omicron is the variant spreading now and the share of other variants is very low," the minister said responding to a question of Leader of Opposition Ramvir Bidhuri.

Earlier in the day, Jain had told reporters that Omicron accounted for 84 per cent of the latest Covid samples tested.

The minister told the assembly that none of the Omicron-infected patients in Delhi's hospitals have so far required oxygen.

"We conduct RT-PCR tests on all international passengers at the airport. Those who test positive are sent into institutional quarantine at Lok Nayak Hospital and some private hospitals," he said.

Jain said the Delhi government repeatedly requested the Centre to stop all international flights to prevent the spread of Omicron in India but it did not do so.

"Everyone knew Omicron did not originate in India. It came from foreign countries. I repeatedly requested the Centre, the chief minister (Arvind Kejriwal) wrote a letter to Prime Minister Narendra Modi to stop all international flights. But they did not do so," he said.

He said though there is a spike in cases but the situation is under control as not many people are developing severe disease or require hospitalisation.

According to the health bulletin to be issued later on Monday, the capital has recorded around 4,000 new cases of coronavirus and the positivity rate has increased to 6.5 per cent, the minister said.

Jain said some experts have said the cases will peak in a week but it's conjecture.