The matter at present is listed for hearing on January 6 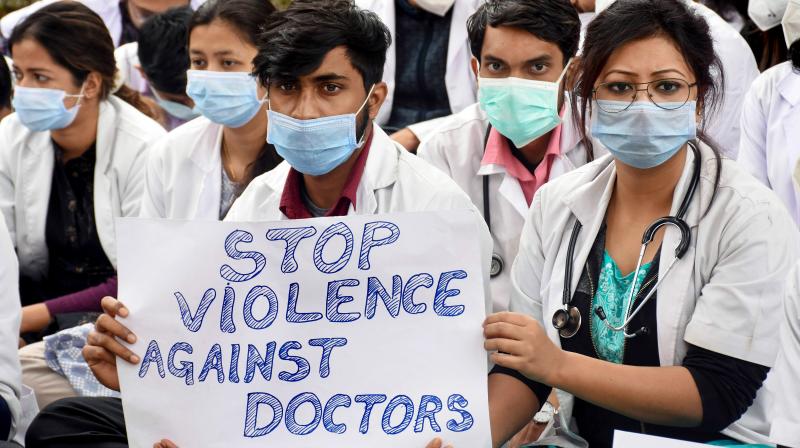 Junior doctors stage a protest to condemn the police action on a peaceful protest of resident doctors in Delhi who were agitating over delay in NEET counselling, at Gauhati Medical College Hospital (GMCH) in Guwahati. (Photo: PTI)

New Delhi: The Centre requested the Supreme Court on Monday to schedule a hearing in a matter related to the Economically Weaker Section (EWS) quota in connection with the NEET-PG admissions on Tuesday, citing "some urgency".

A bench of justices DY Chandrachud and AS Bopanna told Solicitor General Tushar Mehta, who mentioned the matter before the court on behalf of the Centre, that the EWS quota matter is being heard by a three-judge bench of the top court.

"The moment today's work gets over, I would make a request to CJI NV Ramana for the listing of the case," Justice Chandrachud said.

Mehta said if it is not possible to list the matter on Tuesday, then it could be listed on Wednesday.

Senior advocate Arvind Datar, appearing in court on behalf of the doctors who have challenged a government notification for the implementation of the quota, said he has no objection if the matter is listed on Tuesday or Wednesday.

The matter at present is listed for hearing on January 6.

Large-scale protests have been held by resident doctors of various hospitals under the banner of the Federation of Resident Doctors' Association (FORDA) in Delhi and other parts of the country over a delay in the NEET-PG counselling, which has been postponed due to the Centre deciding to revisit the criteria for the determination of the EWS quota.

In its affidavit filed in the apex court, the Centre has said it has decided to accept the recommendations of a three-member panel to retain the current gross annual family income limit for the Economically Weaker Sections (EWS) at Rs 8 lakh or less.

The government has also told the court that according to the panel, family income is a "feasible criterion" for defining EWS and in the current situation, a threshold of Rs 8 lakh of annual family income seems reasonable for determining EWS.

In its affidavit filed in a matter related to admissions for NEET-PG, the Centre has said the panel has recommended that "only those families whose annual income is up to Rs 8 lakh would be eligible to get the benefit of the EWS reservation".