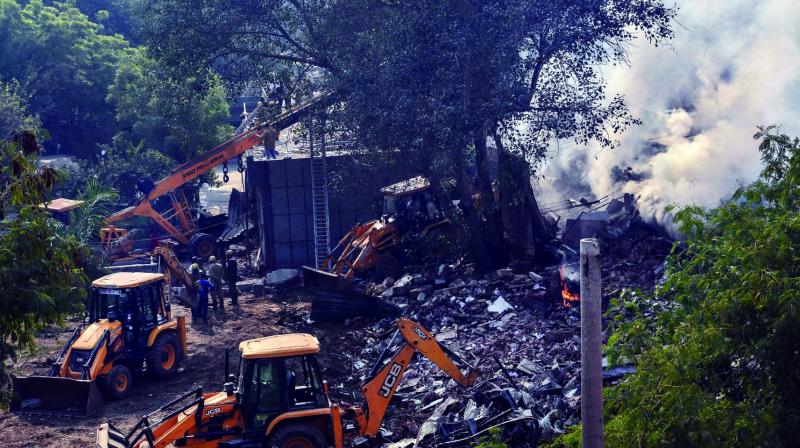 Smoke billows from a battery factory after a blaze led to the collapse of the building at Peera Garhi in New Delhi on Thursday. (Photo: PTI)

New Delhi: A 20-year-old firefighter was killed, while 14 others were injured after a battery factory collapsed in Northwest Delhi’s Peera Garhi following an explosion due to a fire that broke out early on Thursday morning. The police said that 18 people were rescued from the building, including two caretakers and a security guard. Meanwhile, the police also said that the incident will be probed by its crime branch. Delhi home minister Satyendar Jain also visited the spot and ordered a magisterial inquiry into the matter. The deceased firefighter has been identified as Amit Balyan (20), a fire operation with Delhi Fire Services (DFS) and a resident of Delhi’s Shahdara area. The police said that Amit was admitted to Sri Balaji Action Medical Institute and succumbed to his injuries during the treatment.

Chief minister Arvind Kejriwal announced an ex gratia of `1 crore to the family of the deceased firefighter.Mr Kejriwal condoled his death and tweeted, “It is with deep sadness I inform you that one of our firemen was martyred while saving people from fire. Our firemen save other people’s lives by putting their lives under extremely risk in difficult circumstances. May his soul rest in peace.”

Delhi lieutenant-governor Anil Baijal also condoled the death of the firefighter. “Deeply anguished over news of death of fire operator Amit Balyan along with his team members fought bravely to save lives of many people. I salute his bravery. My sincere condolences to his family members. All possible assistance to be extended to the injured & bereaved family,” he tweeted.According to Atul Garg, director, DFS, a call regarding a blaze in a factory located at Udyog Nagar in Peera Garhi was received at 4.23 am following which seven fire tender were rushed to the spot.

“While the firemen were dousing the fire, a large portion of the two-storey building collapsed following an explosion. The National Disaster Response Force and civil authorities rushed to the spot to control the situation and a total of 35 fire tenders were at the spot,” said Mr Garg.“The fire was brought under control but the cooling process is still underway. All the firemen, who were trapped under the debris, have been rescued,” said Mr Garg.According to the police, eighteen people were rescued, including two caretakers and a security guard. “Around 14 people were injured and 13 of them were firefighters. The injured, including a security guard of the factory, were rushed to nearby hospitals where they are undergoing treatment. Peera Garhi fire case has been transferred to crime branch for investigation,” said a senior police official.

Plumes of smoke billowed out from the building as the fire brigade personnel battled to contain the blaze. An eyewitness said several explosions were heard as the blaze gutted down the building.

Santosh Kumar, who works in a plastic factory nearby, said around 9 am, the back side of the building collapsed. “Two to four persons were trapped still trapped inside the building and were heard screaming for help. The fire personnel rescued them with the help of a ladder. They were alive,” he said. Delhi BJP chief Manoj Tiwari, who visited the fire scene, said he got to know that the condition of a person, some Manjeet Rana, is stated to be critical... The incident is big. Investigation has to be done. The fire took place around 4 am and the fire personnel are still trying to control the fire.       Earlier in the day, Kejriwal said he was monitoring the situation. “V sad to hear this. Am closely monitoring the situation. Fire personnel trying their best. Praying for the safety of those trapped,” Kejriwal tweeted.Baijal had also tweeted earlier in the day and said “Deeply saddened over the unfortunate fire incident in Peeraghadi. Met the injured. Pray for their speedy recovery. Brave firemen are putting all efforts to douse the fire and rescue people. Directed authorities to provide all possible help on urgent basis.”