India   All India  03 Jan 2019  'Conspiracy for political gains': Kerala CM lashes out for violence during hartal
India, All India

'Conspiracy for political gains': Kerala CM lashes out for violence during hartal

CM said that observing a hartal in the name of women's entry into the shrine was like calling a hartal against the Supreme Court order. 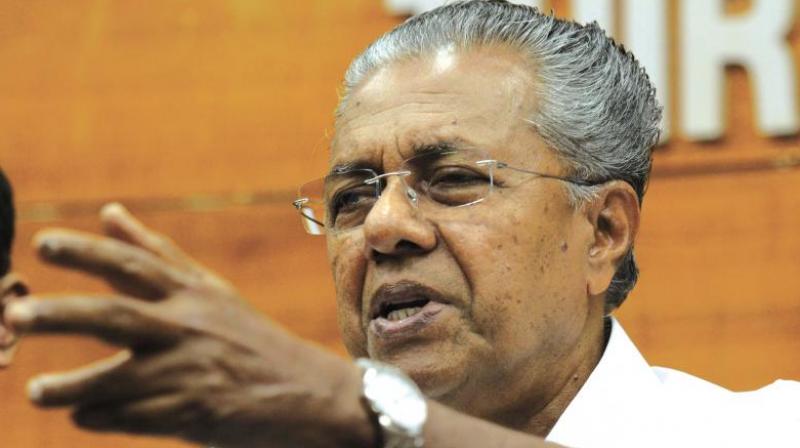 The Chief Minister said that the two women who visited Sabarimala early Wednesday morning were not airdropped, but went as normal devotees. (Photo: File)

Thiruvananthapuram: Kerala Chief Minister Pinarayi Vijayan Thursday lashed out at BJP and RSS, accusing them of unleashing violence during the hartal over the Sabarimala women's entry issue, saying it was a 'conspiracy for political gains' and would be dealt with strongly.

Two women in their 40s had defied threats from saffron outfits and offered prayers at the temple early on January 2. The Chief Minister said that the two women who visited Sabarimala early Wednesday morning were not airdropped, but went as normal devotees.

"The women were given protection after they sought security to visit the shrine. They were not airdropped. They visited the shrine like normal devotees. None of the devotees protested," Vijayan told reporters here.

He also said that devotees at the temple never had any issue with women visiting the shrine and all the violence that started hours after their visit was a "conspiracy for political gain by the RSS".

The Chief Minister also said that observing a hartal in the name of women's entry into the shrine was like calling a hartal against the Supreme Court order.

Coming down heavily on the chief priest's action of closing the shrine for a purification ceremony, Vijayan said that this was against the Supreme Court order.

"Such things are to be decided by the Devaswom Board. The action was not only a violation of the Supreme Court verdict, but also against the rules of the Board," he added.

Vijayan laughed off the casteist remarks made against him by various BJP party members and leaders, including state vice-president M Sivarajan and said they had been doing it for a long time.

"They keep reminding me of my caste. They tell me that I belong to a particular caste. In the Chaturvarnya system, a person belonging to a particular community should do only a particular job. I have said this many times. My father was a toddy tapper. My brothers were also doing the same. They (BJP) expect me to follow my family's footsteps. But times have changed," Vijayan said, adding that "a new era has come and they will have to understand it."

Vijayan has been facing casteist remarks ever since his government took a stern stand over the entry of women into Sabarimala following the apex court decision of September 28.

During the initial protests against the states decision to implement the top court order, a local lady in her 50s had used a derogatory term to denote Vijayan's caste and a video of it went viral. She later shot a video, apologising to the Chief Minister.

A few days ago, 'Janmabhoomi' a BJP mouthpiece, carried a cartoon making fun of Vijayan by referring to his caste of traditional toddy-tappers and implying that he was unfit for the job. Following a strong backlash from various quarters, the daily sacked the cartoonist.

On Wednesday, Sivarajan, while speaking to the media, had said that it would have been better if Vijayan went back to toddy tapping instead of being the Chief Minister.

The state has been witnessing widespread violence after two women of the traditionally barred age group visited the shrine early Wednesday.

A total of 79 state transport corporation buses were damaged in stone-pelting.

Many media personnel, including women, were attacked and 31 policemen were injured.

CPI(M) party offices were also attacked at many places.

Right wing parties and a section of devotees under the aegis of Sabarimala Karma Samiti have been protesting against the September 28 verdict of the apex court, allowing women of all ages into the hill shrine of Lord Ayyappa.

Following the entry of the two women, the Samiti, had called for a dawn-to-dusk hartal, which was being supported by the BJP.