Yogesh Raj is accused of inciting mob violence on December 3 after cow carcasses were recovered from a forest near Mahaw village. 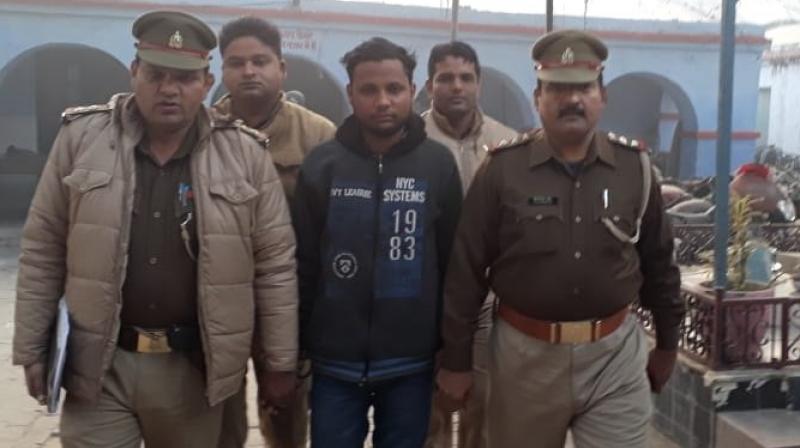 Bajrang Dal leader Yogesh Raj, who is the main accused in the Bulandshahr mob violence in which a police officer was killed last month, was arrested on Thursday. (Photo: Twitter | ANI)

New Delhi: Bajrang Dal leader Yogesh Raj, who is the main accused in the Bulandshahr mob violence in which a police officer was killed last month, was arrested on Thursday.

Yogesh Raj was absconding since violence broke out in Uttar Pradesh’s Bulandshahr over alleged cow slaughter.

In a video released last month, the local Bajrang Dal leader claimed innocence and that he was not present at the site where the violence had erupted.

Yogesh Raj is accused of inciting mob violence on December 3 after cow carcasses were recovered from a forest near Mahaw village.

His arrest comes two days after the police arrested another key accused Kalua in the case. Kalua had confessed that he attacked police inspector Subodh Kumar Singh with an axe after the cop stopped him from felling a tree to block the road.

On December 27, Prashant Natt -- the man who allegedly shot the inspector -- was arrested by the police.

With Yogesh Raj’s arrest, the number of those taken into custody in connection with the crime is 31 so far.

The violence had erupted after cow carcasses were found near Mahaw village in Bulandshahr district. As the police reached the spot, angry mobs attacked the cops who later fired in the air.

Two persons were also injured in police firing one of whom, Sumit, died later. The police clashed with people who had blocked a road in Syana while protesting against illegal animal slaughter.

The protesters torched the Chingarwathi police outpost and set several vehicles, including a police van, on fire and pelted stones at the cops.