2 women in 40s pray at Sabari, Kerala in turmoil

Later, the temple shut down for ritual purification briefly before reopening. 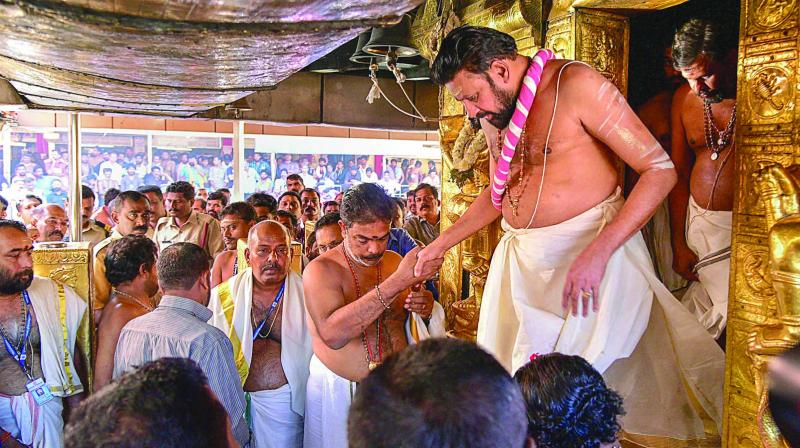 Priests carry out ‘purification’ of the Lord Ayyappa Temple after two women in their early 40s entered the shrine and offered prayers in Sabarimala, Kerala, on Wednesday. (Photo: PTI)

Alappuzha (Kerala): Two daring women under the age of 50 have fulfilled their vow to worship at the Sabarimala temple, taking the whole nation by surprise and plunging Kerala into turmoil. The two women — Bindu, 40, an assistant professor at the School of Legal Studies under Kannur University and a resident of Thalassery, Kannur; and Kanakadurga, 41, an assistant manager at Kerala State Civil Supplies Corporation at Perinthalmanna, Malappuram — visited the temple incognito at 3.48 am on Wednesday and had a darshan of Lord Ayyappa. They thus became the first to reach the Lord’s abode after the Supreme Court ordered the end of a ban on women of menstrual age entering the shrine on September 28. Later, the temple shut down for ritual purification briefly before reopening.

In the visuals shown by TV channels, the women were seen hurrying towards the shrine, dressed in all-black and escorted by plainclothes police personnel. They reached Pampa carrying the traditional “irumudikkettu” on their head, started trekking at 1.30 am, reached the sannidhanam by 3.30 am,
and left after praying to Lord Ayyappa by 3:50 am. There was no media glare and there were very few devotees, which made the darshan possible.

The “great wall” by pro-LDF women the previous evening proved to be a distraction as even the right-wing vigilantes were off their vigil at the hilltop. A few devotees noticed something amiss, but did not react.

Bindu told reporters that they sought police protection at the Pampa police station. “The police escorted us both in uniform and plainclothes to the sannidhanam. The devotees who identified us did not protest,” she said.

They did not climb the 18 sacred steps used by Ayyappa devotees, but went through a side entrance used by VIPs and the media. Thus they could directly reach the forecourt and enter the sanctum. According to one report, the women were accompanied by four men.

Kerala chief minister Pinarayi Vijayan confirmed their visit and said: “It is a fact that the women entered the shrine. The police is bound to offer protection to anyone wanting to worship at the shrine.”

They had reached Sabarimala on December 24 after 11 women activists of Chennai-based Manithi were chased away by devotees. The two were heckled and stopped by the protesters midway then. The police admitted them to Kottayam Medical College Hospital, where too the mob tried to attack them.

The police told reporters that anyone, irrespective of men and women, can enter the temple and the police will provide protection to the devotees.

The temple authorities, headed by the chief priest (tantri), shut the shrine for 30 minutes after evacuating the devotees from the sannidhanam. It was reopened after sudhikalasam (purification ceremony).

State industry minister E.P. Jayarajan called it contempt of court, saying: “Untouchability is against the law.”

Pandalam palace managing committee chairman P. Ramavarma Raja told this newspaper that the tantri could take the final decision on the temple affairs. “The purification happens when the rules are broken. So there is no question of contempt of court. The government will face contempt of court as the chief minister supported the activists entering the temple. This issue will be raised when the court considers the review petition later this month,” he said.