'I want to congratulate (Kejriwal) that I have accepted my martyrdom,' Kumar Vishwas said. 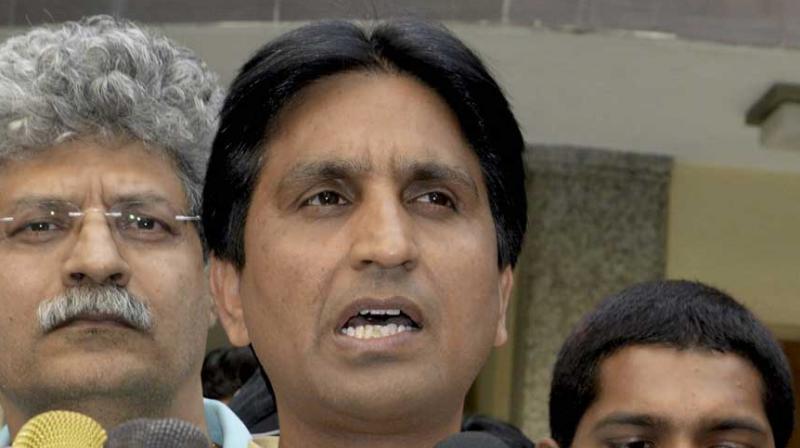 Kumar Vishwas, who was angling for an Rajya Sabha slot, said that it was difficult to survive in the party if one disagreed with Arvind Kejriwal. (Photo: ANI | Twitter)

Vishwas, who was angling for an Rajya Sabha slot, said that it was difficult to survive in the party if one disagreed with Kejriwal.

His comments came as the party named Sanjay Singh, Sushil Gupta and ND Gupta as its Rajya Sabha nominees.

While Singh has been associated with the party since its inception, Sushil Gupta is a Delhi-based businessman and ND Gupta a chartered accountant.

“In the last one-and-a-half years, I spoke the truth, whether it is Arvind Kejriwal’s decisions or issues like surgical strike, irregularities in ticket distribution, softness towards extremists in Punjab, JNU incident, among others, and I have been rewarded in the form of punishment,” Vishwas told reporters in New Delhi.
“I think that it is a moral victory for a true revolutionary, poet and friend,” he added.

Taking a dig at Kejriwal for nominating ND Gupta and Sushil Gupta to the Raya Sabha, Vishwas said that he wanted to congratulate AAP volunteers that their voice has been heard in choosing the “great revolutionaries”.

The AAP leader alleged that around one-and-a-half years ago Kejriwal had, in a party’s national executive meeting, said with a smile, “We will finish you, but we will not let you be a martyr”.

“I want to congratulate (Kejriwal) that I have accepted my martyrdom,” Vishwas said.

Elections to three Rajya Sabha seats from Delhi are to be held on January 16. The AAP, which has 66 seats in the 70-member Assembly, is set to win all the three.

The last date for filing the nominations is January 5.