Most child deaths in India occur from treatable diseases like pneumonia, diarrhea, malaria and complications at birth. 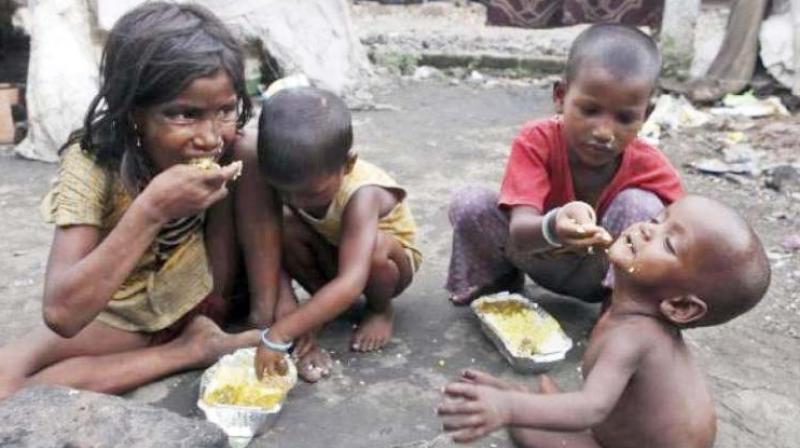 Many children are born to anaemic and malnourished teenage mothers. Indeed, 33.6 per cent of Indian women are chronically undernourished and 55 per cent are anaemic.

We are guilty of many errors and many faults, but our worst crime is abandoning the children, neglecting the fountain of life. Many of the things we need can wait. The child cannot. Right now is the time his bones are being formed, his blood is being made, and his senses are being developed.

To him we cannot answer ‘Tomorrow’, his name is today.
— Gabriela Mistral

A recent alarming signal in the health profile of Indian children went largely unnoticed. India, whose growing prosperity has hardly made any significant dent into chronic malnutrition of children, slipped three places to 100 in the 2017 Global Hunger Index (GHI) of 119 countries in which it has consistently ranked low. India has historically fared poorly on child nutrition indicators and has been plagued by periodical waves of malnutrition-related deaths in tribal areas. The technological boom appears to have bypassed these regions.

With 17 per cent of the world’s population, India is home to a quarter of the world’s hungry. The dismal health of Indian women and children is primarily due to lack of food security. Food security exists when all people at all times have physical, economic and social access to safe, adequate and nutritious food that meets their dietary needs for a healthy and active life. It is measured along a continuum, from the most severe state of starvation to acute enduring hunger, then chronic persistent hunger and finally hidden hunger. Much less investment is required to maintain adequate nourishment for children than is required to treat undernourished children.

Of all Indian children under five, one in three (35.7 per cent) is underweight (low weight for age), one in three (38.4 per cent) is stunted (low height for age); one in five (21 per cent) is wasted (low weight for height) and only every second child exclusively breastfed for the first six months; 3,000 children die every day from poor diet-related illness; fewer than half of all Indian children start nursing within their first 24 hours, although breast-milk helps to protect infants against infection.

This is worse than many sub-Saharan countries. Overall, India accounts for more than three out of every 10 stunted children globally. This is largely owing to a lack of quality food, poor care and feeding practices and inadequate water, sanitation and health services in the country. The chronic impact of stunting on lifelong learning and adult productivity, in addition to increased disease susceptibility, is well known. Going by National Family Health Survey-4 results, it appears that 40 per cent of our future workforce will be unable to achieve their full physical and cognitive potential.

Many children are born to anaemic and malnourished teenage mothers. Indeed, 33.6 per cent of Indian women are chronically undernourished and 55 per cent are anaemic. The loss of gross domestic product to anaemia was estimated at $22.64 billion (`1.50 lakh crores) in 2016, more than three times the health budget of the country for 2017-18.

According to the India State-level Disease Burden Report and Technical Paper, the disease burden due to malnutrition dropped in India substantially since 1990 but was still responsible for 15 per cent of the total disease burden in 2016 and was 12 times higher than in China.

The well-known development economist Jean Dreze argues that the most serious nutrition challenge in India is to reach out to children under three years of age: “It is well known that if a child is undernourished by age three, it is very difficult to repair the damage after that.” The costs of failing to do so — both in human and economic and terms — are huge. Pervasive long-term malnutrition erodes the foundations of the economy by destroying the potential of millions of infants. Children stunted on account of malnutrition are estimated to go on to earn an average of 20 per cent less as adults. Many of them will turn out to be morons.

A package of basic measures — including programmess to encourage mothers to exclusively breastfeed their children for up to six months, fortifying basic foods with essential minerals and vitamins, and increased cash transfers with payments targeted at the poorest families — can turn the tide.

India already has two robust national programmes addressing malnutrition — the Integrated Child Development Service (ICDS) and the National Health Mission — but these do not yet reach enough people. The delivery system is also inadequate and plagued by inefficiency and corruption. Some analysts estimate that 40 per cent of the subsidised food never reaches the intended recipients

Most child deaths in India occur from treatable diseases like pneumonia, diarrhea, malaria and complications at birth. The child may eventually die of a disease, but that disease becomes lethal because the child is malnourished and unable to put up resistance to it. The staff of ICDS places part of the blame of malnutrition on parents being inattentive to the needs of their children, but crushing poverty forces most women to leave their young children at home and work in the fields during the agricultural seasons. The high frequency of malnutrition-related deaths in tribal areas has given birth to a wave of crude superstitions forcing families to seek help of dubious godmen.

A significant cause of malnutrition is also the deliberate failure of malnourished people to choose nutritious food. One survey by the economists Duflo and Banerjee has found that, overall, the poor in developing countries had enough money to increase their food spending by as much as 30 per cent but that this money was spent on alcohol, tobacco and festivals instead.

Progress is still slow and the political will patchy but there are signs that a new approach is taking root. India’s official think tank Niti Aayog has drafted a national nutrition strategy that aims to eradicate malnutrition from the country by 2030. With this end in view it has set the following targets:

Some other recommendations are for programmes to promote breastfeeding for the first six months after birth, universal access to infant and young childcare, including ICDS and crèches, provisions to provide biannual critical nutrient supplements and programmes aimed at deworming children. In the area of maternal care, the strategy proposes that the government provide nutritional support — in particular, the adequate consumption of iodised salt — to mothers during pregnancy and lactation.

In order to consolidate its efforts towards tackling the malnutrition challenge, the government has approved the National Nutrition Mission (NNM). With a budget of `9,046 crores over a period of three years, the mission is expected to benefit 10 crore people. Through the programme, the government is aiming to reduce stunting, malnutrition and low birthweight by 2 per cent each year.

These policies can reap the desired dividends if the government sets hard-coded timelines and maintains stringent monitoring. Good intentions have to be accompanied by similar actions on the ground.

Moin Qazi is the author of Village Diary of a Heretic Banker. He has spent more than three decades in the development sector.