Can Rahul Gandhi manage to stem the saffron tide in 2019?

While the BJP won the state as the exit polls had predicted, the victory has not been sweet as they had a focused Congress Party sniping at its heels. 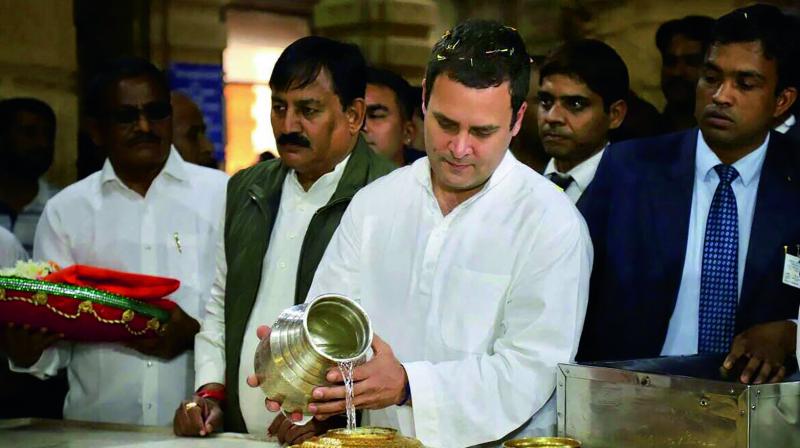 As the cacophony of the Gujarat elections dies down, we can leave the electoral pundits to analyse the statistics of the verdict of the people. While they study the ups and downs and the shifts in vote percentages, and what these signify for the country in the future, political parties begin an analysis of their own. They look back at the campaign strategies and try to determine what their takeaway should be.

In this, the Congress Party comes away with a moral victory. It has not only restricted the BJP to only 99 seats in the Prime Minister’s home state, it has done so with a clean and positive campaign which stayed people-centric and issue-based. In his first-ever interview with the foreign media, Rahul Gandhi had many years ago condemned the “divisive” politics in India, and had portrayed himself as a unifier of the country. In his Gujarat campaign, he kept that promise and gave us hope for the future.

By connecting with the people of Gujarat, Rahul Gandhi gave the BJP leaders a scare in their own den, forcing them onto the backfoot, requiring the Prime Minister to personally address more than 40 rallies, the party president, Amit Shah, to stay in the state for more than two months and deploying all Union Cabinet ministers and the party’s chief ministers to come and campaign in an election which should have been a cakewalk for the ruling party. Rahul Gandhi stood alone against the BJP machinery and its strongman, Prime Minister Narendra Modi — an encounter truly reminiscent of the battle between David and Goliath.

While the BJP won the state as the exit polls had predicted, the victory has not been sweet as they had a focused Congress Party sniping at its heels. Coming a close second, the Congress and its new leader Rahul Gandhi have been the main talking point in the media, leaving with the BJP with a lot of introspection to do.

With a new president in place, the Congress Party’s workers are enthused and energised. The results have given them a new josh and utsah. A reinvented Rahul Gandhi rolled up his sleeves and went to work in the state a few months ago, criss-crossing the villages and towns of Gujarat, connecting with the people at the grassroots. This was so much at variance with the massive rallies that were held by the BJP, from where its leaders talked down to the people.

Many long years ago, another Congressman had chosen to work among the people, live amidst them and understand them so that he could represent them. He had led the country to light and freedom. Mahatma Gandhi had also mentored younger Congressmen at that time, to follow his example and connect with the people, to travel through the countryside and get to know India firsthand so that they could truly speak for the people. Once the young Congressmen, among them Rahul’s great-grandfather Jawaharlal Nehru, adopted this philosophy, they were able to rally the people with them and together fight against the oppression of the British.

The difference in the campaigning styles of the two leaders who find themselves at the centrestage of Indian politics at present is extremely stark. The Prime Minister, the strongman of his party, backed by the might and money of the ruling party, one of the richest in India, on the one hand, and Rahul Gandhi, the young scion of India’s oldest and most influential political family, on the other. They come from different backgrounds, opposing ideologies and have a disparate vision of India.

They speak a completely different language — the threatening, vitriolic and divisive speeches of the Prime Minister, and the civil, respectful and unifying address of the challenger. Rahul Gandhi remained determined, through the Gujarat campaign, to keep the discourse civil and respectable and resisted all attempts of the BJP to provoke him to descend to their communal and poisonous rhetoric.

The BJP leaders thundered at the crowds, creating a fear of the “other”, while Rahul mingled with the people and embraced them. The PM abused him derisively, calling Rahul a shehzada, alluding to his privileged birth, while he turned the tables on him, using his winning ways to become a shehzada of the hearts of the people.

The BJP threatened to create a “Congress-mukt Bharat”, while Rahul Gandhi reassured the masses that there was a place for every ideology and that he would attempt to win them over to his vichardhara through discourse.

The abuse and the vitriolic attacks are not new. Rahul Gandhi has been abused by the BJP ever since he entered politics. In an interview after the Gujarat elections, Rahul expressed his gratitude to Prime Minister Modi for having made him a stronger person by attacking him over the years. “I would not be where I am, if it were not for the PM attacking me,” he said.

The Gujarat verdict has also silenced Rahul Gandhi’s detractors. He has emerged the main challenger of the Prime Minister and the likeliest candidate to lead an anti-BJP alliance going into the general election in 2019 to stem the saffron tide that threatens to destroy the country.