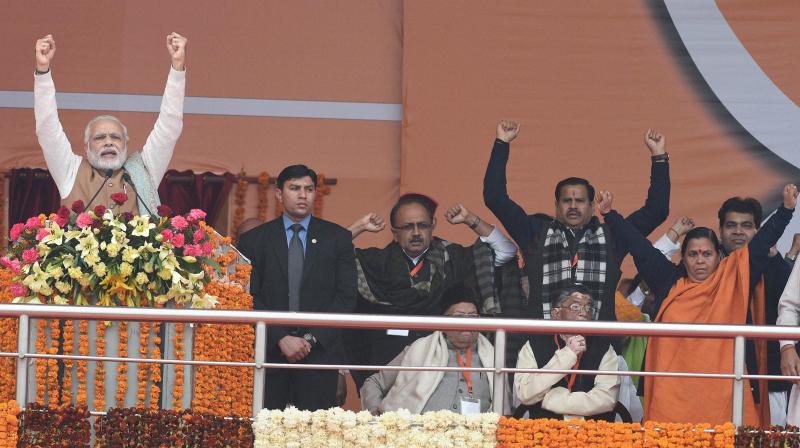 Lucknow: Prime Minister Narendra Modi said on Monday that people should rise above caste considerations and vote for Uttar Pradesh’s development. Addressing a rally in Lucknow, he vowed to escalate his “war on corruption” despite “pressures” from the parties in the state where Assembly elections will be announced anytime soon.

Mr Modi accused the BSP and the feud-ridden ruling SP of joining hands to seek his removal, while he was “working to weed out black money.”

It was the ‘hawa ka rukh’ that made PM Modi exude confidence about the BJP’s chances in the upcoming UP elections. “Hawa ka rukh bata raha hai ki election kis taraf jaa raha hai”, the PM said while calling the rally the biggest of his political career.

He eulogised former Prime Minister Atal Behari Vajpayee who represented Lucknow in the Lok Sabha, and said that the BJP patriarch would be very satisfied to see people’s response. He said “the massive turnout” at the sprawling Ramabai Ambedkar rally sthal showed which way the wind was blowing.

“People of UP have to decide whether those busy saving their black money and family can save the state,” he said. Invoking Bhimrao Ambedkar, one of the key architects of India’s constitution, the PM claimed that some people were troubled when his government launched Bhim mobile app named after the dalit icon.

“Will politics stoop so low? I want that we go to villages to all those carrying mobile phone and ask them to download the app and remember Bhim everywhere...This will be the biggest tribute to Bhimrao Ambedkar,” he said.

Referring to his New Year eve address when he launched schemes for the poor, he said some people were troubled by it as well. “They are troubled when Modi takes money and also when gives it (to the poor). Their problem is that their chairs are shaking,” he said.

“They have become irrelevant and are looking for the lost ground by indulging in petty politics,” he said , adding that he has taken a resolve to return what has been snatched away from the deprived and middle class.

“The fight against corruption will continue till it is won and we want the blessings of the people of Uttar Pradesh,” he said urging the voters to give a majority to the BJP.

The PM said since he was an MP from the state he had experienced how the government was run here. He said he was appalled to know that in his own Varanasi constituency works were decided after seeing who made the recommendation for construction of roads or pathways.

“Ever since our government came to power in Delhi every year an additional `1 lakh crore more has been given to the state...Had that been used properly a lot of difference would have been made here.... Development is not a priority of the state government,” he said.