Ruckus in Assembly as CM Mehbooba blames NC for rigging elections in 1987. 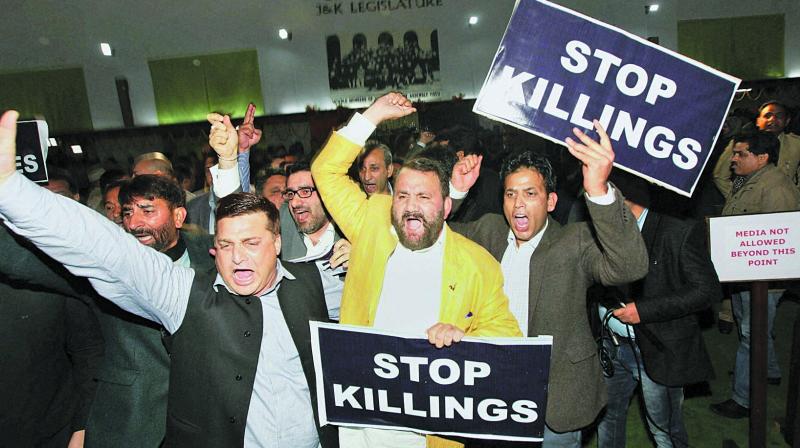 Opposition members protest during the address of the J&K governor on the first day of budget session in Jammu. (Photo: PTI)

Srinagar: The Jammu and Kashmir Assembly was on Monday adjourned after chief minister, Mehbooba Mufti’s assertion that the state was driven into militancy and the vicious cycle of violence because the (Opposition) National Conference (NC) rigged elections in 1987 triggered pandemonium in the House.

Uproarious scenes were witnessed also inside the Central Hall of the Legislature during the governor’s address earlier, forcing him to cut short his speech. The moment governor N.N. Vohra arrived in the Central Hall, all the Opposition legislators rose from their seats to chant anti government slogans. They also tried to storm the pedestal where from the governor was delivering the customary address to the joint session of the legislature. The governor was forced to cut short his speech and leave the venue in huff.

Ms. Mufti alleged, “People who sowed seeds of secession by demanding plebiscite in the state also rigged elections in 1987 to give birth to militancy.” She added that the rigging of Assembly elections thirty years ago was the “first assault on the aspiration of youth”. The NC members took strong exception to the remarks and rose from their seats to protest. One of them Abdul Majeed Larmi sought to remind the chief minister that her father Mufti Muhammad Sayeed was part of the National Conference-Congress coalition government in 1987 and hence should be held responsible for the alleged rigging. He and other NC members and former minister Muhammad Akbar Lone began shouting at the chief minister. Mr Larmi also said the PDP’s partnership with the BJP, which he called as “RSS alliance,” was the “most painful betrayal to the Kashmir.”

After the Opposition members were calmed down by the Speaker, the chief minister, while continuing her speech, said that the killings were “unfortunate” and that these should not have taken place. She accused the Opposition of being responsible for spurt in unrest. “You started it (unrest) and you should discuss (it) first with me,” she said. She, however, at the same time sought the support of the Opposition in her efforts to take Jammu and Kashmir out of the cycle of uncertainties and violence.

She said the present uncertainties in the State have their roots in many of the misadventures in the past by some political elements just to remain in power. She said, “Everyone in the State is pained by the repeat of cycle of violence and killings. We need to stop this and for that all the stakeholders also need to make unified efforts so that future of the people of the State is secured”

The Chief Minister said that just two days back she received the final report of Justice (Retd) M. L. Koul Commission which was instituted by the then government to probe the killing of more than 120 youth in the State in 2010. “How long shall we be appointing commissions and enquiries and receiving their reports. We need to have joint efforts in getting Jammu & Kashmir out of it,” she said.

Referring to recent unrest in the Valley, the Chief Minister regretted that the present situation in the State is the direct fallout of many of the “political misadventures in the past by some political forces just to remain in power”. She said the 22 year long political struggle by Sheilkh Muhammad Abdullah and his colleagues and its abrupt end in mid 1970s and the rigged elections of 1987 almost finished the space for political dissent in Jammu and Kashmir which ultimately forced the youth to resort to violent means. “These events have laid the seeds of uncertainties of present times in the State”, she asserted.

Earlier the House on the first day of its budget session witnessed noisy scenes over the killing of nearly 100 people in the Kashmir Valley during the five-month long unrest set off by the killing of militant commander Burhan Wani. The Legislative Council also witnessed a similar situation during which the opposition members walked out blaming the ruling PDP-BJP combine for violence and destruction in the Valley. While obituary references were being read out in the Upper House of the bicameral legislature, the NC and Congress members walked into the well of the House and then went close to the Chairman ‘s podium while chanting slogans against killing of civilians in the Valley and the use of shotgun pellets and PAVA shells by the security forces in their tough campaign to contain protests.

Uproarious scenes were witnessed also inside the Central Hall of the Legislature during the Governor’s address earlier, forcing him to cut short his speech. The moment Governor, N.N.Vohra, arrived in the Central Hall, all the opposition lawmakers rose from their seats to chant anti government slogans. They also tried to storm the pedestal where from the Governor was delivering the customary address to the joint session of the Legislature. They condemned the killing and maiming of civilians in security forces’ firings and other actions during the unrest. They also demanded severe punishment to those involved in these killings. The opposition members including those of the NC, Congress and other parties were holding placards reading ‘Revoke Public Safety Act’ and ‘Release arrestees’.

The Governor was forced to cut short his speech and leave the venue in huff. The BJP lawmakers accused the opposition of showing disrespect to the National Anthem as they didn’t stop protesting when it was being played after the Governor hurriedly ended his speech amid the din. Some of the opposition members threw the placards they were holding towards the Governor while he was addressing the joint session.

The independent MLA Sheikh Abdur Rashid held a protest at the Legislature complex entrance against the killings. He also demanded that plebiscite be held on both side of the Line of Control (LoC). A placard he was holding read “Hold plebiscite on both sides of LOC”. As soon as Mr. Vohra began his speech, Mr. Rashid confronted him claiming that the people of the State do not accept him as the Governor for he or anyone else “has technically no right to hold the post of Governor as J&K is supposed to have is its own elected Sadar-e-Riyasat (President) and Wazir-e-Azam (Prime Minister).