The farmers, who are from western UP, want to reach the capital to join the bigger stir lead by farmers of Punjab and Haryana 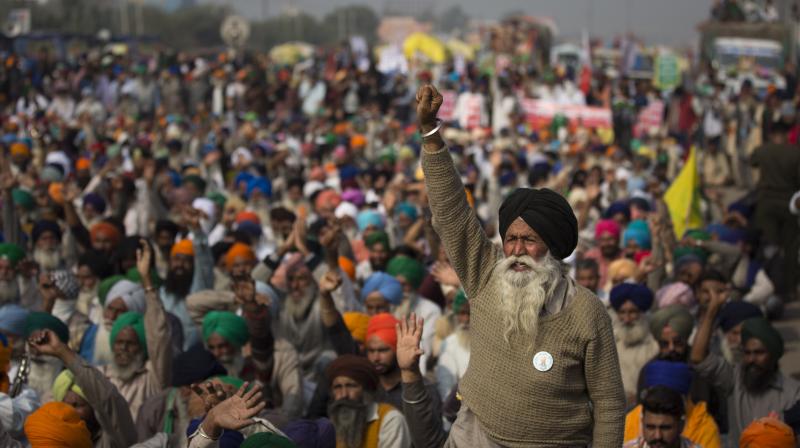 An elderly farmers shouts slogans as others listen to a speaker as they block a major highway during a protest at the Delhi-Haryana state border, India, Tuesday, Dec. 1, 2020. (AP)

Noida: Farmers protesting against the new farm laws continued their sit-in at the Noida-Delhi border for the second day on Wednesday, leading to closure of a key route that connects Uttar Pradesh with the national capital.

The Noida Traffic Police has advised commuters travelling to Delhi to avoid using the Chilla route and instead take the DND or Kalindi Kunj route.

The farmers at the Delhi-Noida border belong to various districts of western Uttar Pradesh and want to reach the national capital to join the bigger stir launched by farmers of Punjab and Haryana against the Centre's agriculture reform laws.

"The Chilla route is obstructed due to the farmers' sit-in demonstration at the Noida-Delhi border. Kindly use alternative routes (DND or Kalindi Kunj) to reach your destination," the Noida Traffic Police tweeted.

Hundreds of farmers affiliated to the Bharatiya Kisan Union and other groups had gathered at the border Tuesday evening where heavy security has been deployed on both Noida and Delhi sides which has prevented them from proceeding further.