Rubbishing the claim, Fadnavis said that whatever has been said against him was totally false. 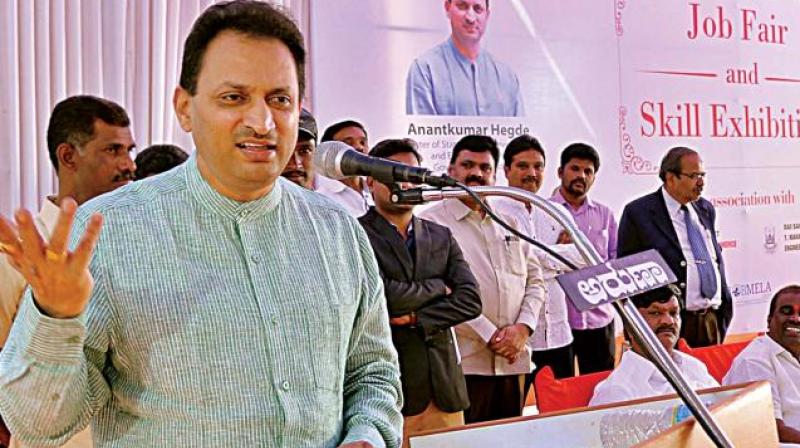 The MP from Uttara Kannada said that the BJP staged a "drama" to move the money to the central government. (Photo: File)

Uttara Kannada: Bharatiya Janata Party (BJP) MP Anant Kumar Hegde has claimed that Devendra Fadnavis was made Maharashtra Chief Minister despite not having a majority to prevent central funds worth Rs 40,000 crore, from being "misused" by the Maha Vikas Aghadi alliance of Shiv Sena, NCP and Congress.

The MP from Uttara Kannada said that the BJP staged a "drama" to move the money to the central government.

"A chief minister has access to around Rs 40,000 crore from the Centre. He knew if Congress-NCP-Shiv Sena government comes to power it would misuse funds meant for development. So, it was decided that there should be a drama. Fadnavis became Chief Minister and in 15 hours he moved Rs 40,000 crore back to Centre," Hegde added.

Rubbishing the claim, Fadnavis said that whatever has been said against him was totally false.

"I have not heard what Anant Kumar Hegde has said, but from what I have heard from the media that Maharashtra government gave Rs 40,000 crore to the central government, it is completely false. I deny this. Nothing like this happened," Fadnavis told media here.

Fadnavis further stated that in the bullet train project, the role of the Maharashtra government is limited to land acquisition.

"Whether it is bullet train or something else, neither central government asked for money from Maharashtra government and neither the state government gave the money," Fadnavis said.

"This statement is completely false. I have not taken any such decision... The Finance department should do investigation this and bring the truth in front of the people," he added.

On November 28, Shiv Sena chief Uddhav Thackeray was sworn in as the Chief Minister of Maharashtra.