Sources said that the BJP-JD(U) are likely to fight from 17 seats each and Mr Paswan’s LJP may get six seats if RLSP decides to quit NDA. 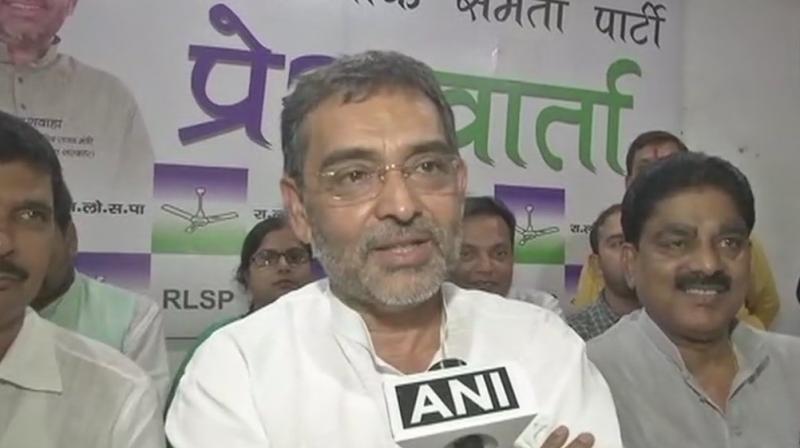 New Delhi/Patna: After a stalemate in talks over seat sharing for the 2019 Lok Sabha elections, the Rashtriya Lok Samata Party, BJP’s Bihar ally, is likely to part ways with the NDA. But severing ties with the ruling alliance may trigger a revolt in the party that has three MPs and two MLAs.

Union minister Upendra Kushwaha, who has been trying to meet Prime Minister Narendra Modi to discuss seat-sharing issues, arrived in Patna on Saturday and said that his “party is being forced to take a decision. But I want to consult party workers before deciding whether to remain in NDA or to part ways”.

Sources confirmed that Mr Kushwaha, a member of the Narendra Modi’s Council of Ministers, was unsuccessful in meeting the top BJP leadership to address this grievance.

Mr Kushwaha-led RLSP is unhappy with the number of Lok Sabha seats being offered to it and is expected to make an announcement of exiting the alliance at a rally scheduled later this week.

Political analysts and RLSP insiders said that Mr Kushwaha, who has been demanding to contest on more than three seats in 2019 general elections, is unwilling to play a minor role in the state and has vehemently rejected the offer of two seats for the Lok Sabha polls scheduled for next year. And is now left with no options other than to quit the NDA.

In the 2014 Lok Sabha polls, the RLSP had fought and won from three seats, and it won two seats in 2015 Bihar elections. This time the party was hoping for four Lok Sabha seats to contest from. But the BJP does not seem to be in the mood to accede to its demand.

Ties between the BJP and RLSP had been faltering ever since the former re-allied with the Nitish Kumar-led Janata Dal(United) in Bihar in 2017. The rift intensified after the NDA’s seat-sharing formula was announced for Bihar. It is understood that the two big allies — JD(U) and BJP — have divided the lion’s share of state’s 40 Lok Sabha seats amongst them, leaving Ram Vilas Paswan’s Lok Janshakti Party and RLSP as minor players.

Sources said that the BJP-JD(U) are likely to fight from 17 seats each and Mr Paswan’s LJP may get six seats if RLSP decides to quit NDA.

Though not a big player, Mr Kushwaha is a strong Koeri leader, the largest OBC group after Yadavs in Bihar with around 10 per cent of voters. Observers say that Mr Kushwaha’s RLSP has a significant voter base in around 20-25 Assembly constituencies in the state.

Though the BJP was trying to iron out differences with RLSP by roping in its general secretary Bhupender Yadav, Mr Kushwaha’s reported meeting with senior leader Sharad Yadav and Tejaswi Yadav fuelled speculation over his next move, and led to murmurs of dissent within his party.

Reports suggest that his two MLAs — Lalan Paswan and Sudhanshu Shekhar — may revolt and split the party if Mr Kushwaha leaves NDA and joins the Mahagathbandhan.

Earlier this month both his MLAs had met JD(U) vice-president Prashant Kishor in Patna to discuss the political situation. Sources said both the leaders were upset with Mr Kushwaha’s stand against Bihar CM Nitish Kumar.

“Upendra Kushwaha should remain with NDA as the RJD or the Congress cannot give him the kind of respect he has been getting from the BJP,” RLSP vice-president Bhagawan Singh Kushwaha said on Saturday.

But other RLSP leaders share Mr Kushwaha’s unease since the announcement in October that the BJP and JD(U) will contest on an equal number of Lok Sabha seats in Bihar.

“We didn’t expect the BJP to ignore our party president Upendra Kushwaha who wants Prime Minister Narendra Modi to return in 2019. All this is happening because Bihar chief minister Nitish Kumar and his deputy Sushil Kumar Modi don’t want us to remain in the NDA,” RLSP leader Jitendra Nath told this newspaper.

He said that Nitish Kumar has also been trying to split the party by luring RLSP leaders.

A section in the RLSP sees Mr Kushwaha as a strong Koeri leader, the largest OBC group after Yadavs in Bihar. Koeris form around 10 per cent of voters in the state. Observers say that Mr Kushwaha’s RLSP has a significant voter base in around 20-25 Assembly constituencies in the state.