'PM (Narendra Modi), UP CM are holding rallies in the state but people have decided to vote out BJP in Dec 7 elections,' Pilot said. 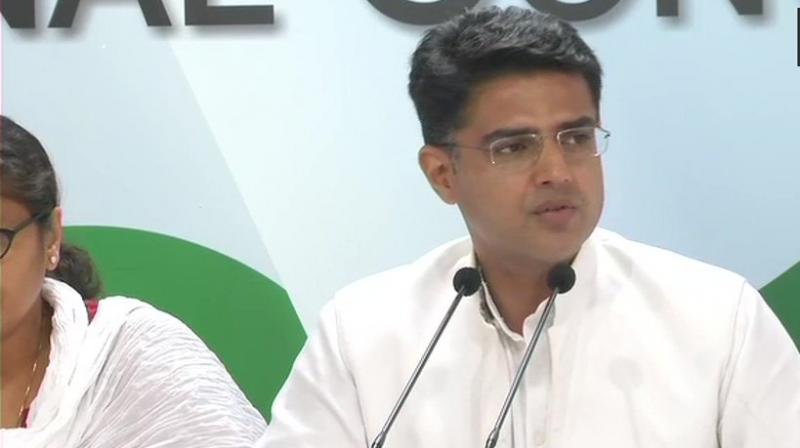 The Rajasthan Congress chief was in Dholpur, the home turf of Chief Minister Vasundhara Raje, to launch his election campaign in the eastern part of the state. (Photo: File)

Dholpur: Congress leader Sachin Pilot Sunday said people of Rajasthan will vote out the BJP in the Dec 7 polls due to the "misrule" of the Vasundhara Raje government, which had failed to curb inflation and corruption.

The Rajasthan Congress chief was in Dholpur, the home turf of Chief Minister Vasundhara Raje, to launch his election campaign in the eastern part of the state. He addressed meetings in Todabhim constituency in Karauli, Dausa, and in Jamwaramgarh, Virat nagar, Amber and Chaksu constituencies of Jaipur district.

"The Vasundhara Raje government was busy in giving contracts of Bajir (sand mines) and liquor to their people while public at large kept suffering due to total misrule of this government," Pilot said at a public meeting here.

"PM (Narendra Modi), UP CM (Yogi Adityanath) are holding rallies in the state but people have decided to vote out the BJP in the December 7 elections," he added.

Stressing that Bharatiya Janata Party's (BJP) days were "over", Pilot said a new Rajasthan will "take shape" under the Congress regime where the youth "will have jobs and farmers will prosper".

"We have declared in our manifesto that farmers' loan will be waived and issues related to youths will be addressed on priority," he said.

Targeting the Raje-government over "poor" law and order, Pilot said minors were being raped and atrocities against women had increased in the state which is ruled by a woman chief minister.

"It is very shameful that such crimes are increasing and the chief minister is not bothered at all," Pilot said, adding that 150 farmers had committed suicide in the state but the government did not care.