BJP’s candidate, Fatima Rasool Siddique, fits the bill since being a woman, she was expected to connect to her community, particularly the women folk. 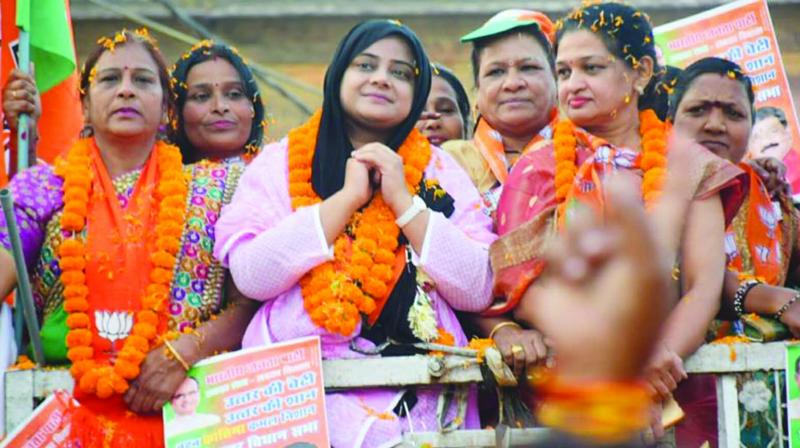 A file photo of BJP candidate Fatima Rasool Siddique campaigning in Bhopal ahead of the November 28 Assembly polls.

Bhopal: The outcome of the just concluded Assembly polls in Bhopal (North) constituency holds much significance for the Sangh Parivar, whether the BJP wins or loses.

For,  the Parivar has turned the Muslim-dominated constituency in Madhya Pradesh its “laboratory” in the November 28 Assembly elections to find a clue to increase the BJP’s popularity among Muslims voters known to treat the rightwing party as a poll pariah.

Saffron workers given charge of the electioneering in the seat were found unusually enthusiastic and seen focusing on particularly the Muslim-populated areas in the sprawling constituency.

“It is an important assignment for us. A new type of poll experiment is being carried out in the constituency which will go a long way in helping the BJP break its electoral barrier and cultivate a new support base in Muslims, hitherto believed unimaginable,” said an RSS leader given charge of four election offices opened by the BJP in the constituency.

“The experiment, if succeeds, will pave the way for BJP to set its sights on around 145 Lok Sabha seats across the country, where the party’s prospects have invariably been hit due to the presence of sizeable Muslim population,” he added.

Bhopal (North) was chosen as the “lab” in the November 28 Assembly elections by the Sangh since the five-time Congress MLA from the constituency Arif Aqeel (66) has made it difficult for the BJP to wrest the seat.

He has enjoyed support of not only Muslims, who comprised around 55 per cent of the total 2.34 lakh voters in the constituency, but also the Hindu constituents.

Saffron strategists have sought to cash in on the purported goodwill generated for the BJP from among Muslim women following its anti-triple talaq stand and make inroads into the minority voters to win the seat in this poll.

BJP’s candidate, Fatima Rasool Siddique, fits the bill since being a woman, she was expected to connect to her community, particularly the women folk.

“We can win the seat if we secure at least 20 per cent Muslim votes,” he said.

Interestingly, Mr Aqeel’s victory margin has been shrinking over the last five elections.

Significantly, the constituency has 23,000-strong Bohra Muslim voters who are considered to be BJP’s supporters.

The BJP candidate, a dentist, is the daughter of former minister Rasool Ahmed Siddique, who won from the constituency twice in 1980 and 1985 as a Congress candidate. He died of cardiac arrest in 1997.

“I have not sought support from voters on communal lines. I have promised to work for development of the constituency and address grievances of all sections of people,” 37-year-old Fatima told this newspaper.

Interestingly, she was seen making temple runs during her electioneering apparently to appeal to the Hindu voters.

“I have inherited secular values from my father,” she said while justifying her temple visits.

If the RSS strategy yields the desired results, it would be adopted in other Muslim-dominated constituencies across the country to harvest electoral gains for BJP in 2019 LS polls, the Sangh leader disclosed.

The model may be fine-tuned if it does not succeed in Bhopal (North).

“It hardly matters to us if BJP loses or wins Bhopal (North). We just want to know how the experiment went. The strategy can be reviewed and fine-tuned for its effective implementation in the coming polls,” he added.