India   All India  02 Dec 2018  If BJP forms govt in T'gana, Asaduddin Owaisi will have to flee from Hyd: UP CM
India, All India

If BJP forms govt in T'gana, Asaduddin Owaisi will have to flee from Hyd: UP CM

Adityanath accused Congress and TRS of indulging in Muslim appeasement and making religion a foundation for making schemes for them. 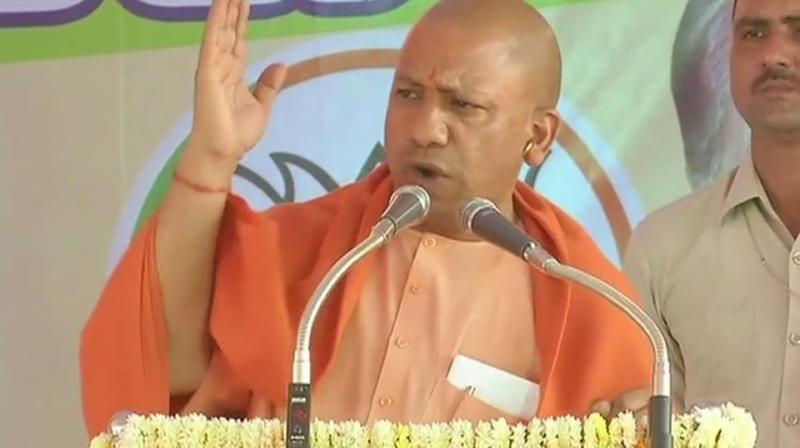 "If anyone is creating obstruction in the way of construction of a grand temple in the birthplace of lord Ram, it's Congress, Congress," he said, addressing a BJP election rally in Sangareddy.

"We should all make efforts to understand the intention of the Congress party," he said.

Adityanath said BJP is for good governance, development, and wants to fufil the model of "Ram Rajya" in the country.

"If BJP forms government in Telangana, I can tell you that Owaisi will have to run away just like Nizam was compelled to run away from Hyderabad. BJP will give security to all but will not allow those who spread anarchy", he said.

He accused both Congress and TRS of indulging in Muslim appeasement and making religion a foundation for making schemes for them. The BJP, he said, does not discriminate between caste, creed and religion while drafting policies.

"Congress says if it forms government in Telangana it will provide area development funds to Muslims. Congress policies are divisive, with wrong intentions," Adityanath said.

Congress and TRS are "playing with" the interests of people in Telangana and once more they would make efforts to take the State towards "Nizamshahi", he alleged.

"BJP did only development, but never did appeasement of anyone. Congress, TDP, TRS all do only dynastic politics. And Owaisi party also does only Muslim appeasement politics," Adityanath claimed.

He sought to know if TRS chief K Chandrasekhar Rao fulfilled the promise of giving three acre land to dalits and providing drinking water for every household.

Adityanath said KCR had, before the 2014 elections, promised to make a Dalit Chief Minister if his party came to power. "Now, they (TRS) are handing over the 'virasat' (legacy) to (his) son and daughter."

"TDP (President) Chandrababu Naidu handed over (reins to his son)... like Sonia Gandhi handed over to Rahul Gandhi... till dynastic tradition runs in India, democracy cannot be strengthened. It needs to be stopped", he said.

Under Prime Minister Narendra Modi in the last four-and-half years, the BJP-led government has been carrying out programmes with a mission of 'Sabka Saath, Sabka Vikas', he added.