The admiral said the Navy’s aviation arm was being augmented by the induction of new fighters, surveillance aircraft and ship-borne helicopters. 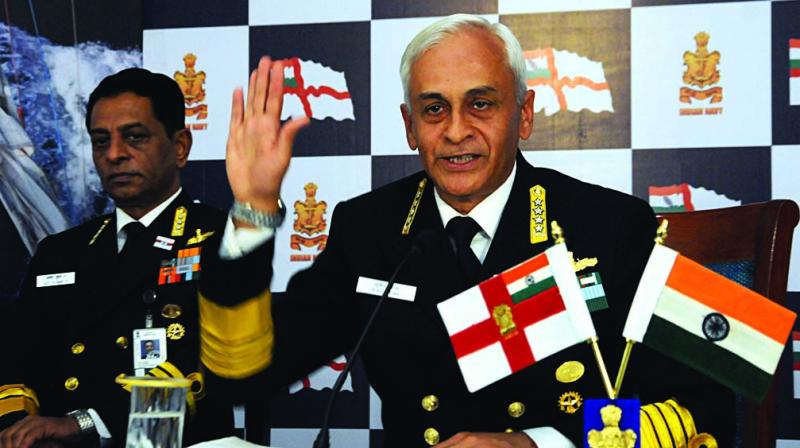 New Delhi: Clearing the air on a controversy that a team of American technical personnel was allowed access to the damaged INS Chakra, a Russian nuclear submarine that is on lease to India, Indian Navy Chief Admiral Sunil Lanba has said that no Americans were given access of the submarine that is being docked at a naval base in Vizag.

“No US personnel had seen the submarine from nearby,” Admiral Lanba told reporters in response to a query.

The Navy Chief confirmed that two panels of the submarine’s sonar dome, its eyes, and ears in the water, had been damaged and a court of inquiry had been instituted to determine the cause of the accident. The accident is believed to have taken place in October.

A Russian newspaper Kommersant had, on its website on November 11, reported that the Indian Navy had allowed a US team to visit INS Chakra,.

A sub-surface nuclear vessel, the lease of the INS Chakra ends in 2022. A nuclear-powered submarine is not nuclear-armed and uses conventional missiles and torpedoes.

On the process of ongoing modernisation of the Navy, Admiral Lanba said 34 ships are under construction and projects worth `40,000 crore have been identified for participation of the private shipyards while 23 Indian private sector shipyards have qualified for participation in indigenous shipbuilding projects on the basis of their capacity, capability and infrastructure.

Work on Indigenous Aircraft Carrier, IAC 1, is progressing well, the Navy Chief said, adding he was hopeful that the ship would join the Navy by 2020.

The admiral said the Navy’s aviation arm was being augmented by the induction of new fighters, surveillance aircraft and ship-borne helicopters.

“The Navy is at the threshold of joining a select league of navies capable of providing submarine search and rescue in the Indian Ocean region with two deep submergence rescue vessel systems scheduled for induction next year,” he said.