BJP clean sweeps UP civic polls, wins 14 out of 16 seats

The Congress bettered its performance by ranking number two in Varanasi, Moradabad and Mathura. 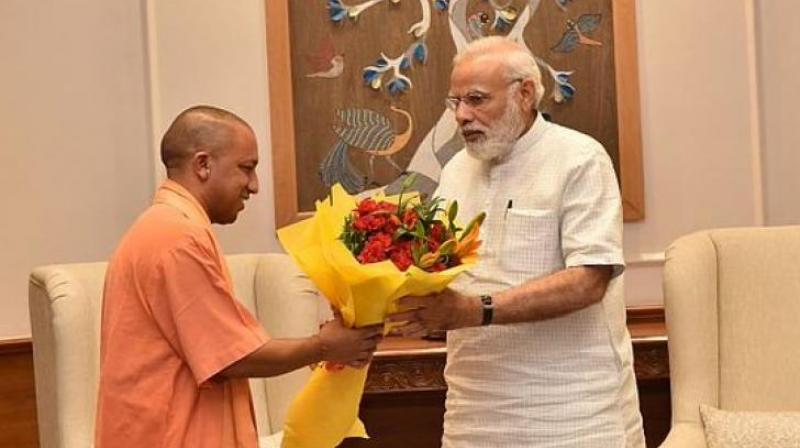 Lucknow: Uttar Pradesh was painted saffron on Friday when BJP swept the municipal elections establishing its complete hold on the three-tier system of the government. The BJP won 14 out of 16 posts in mayoral polls while the BSP made a comeback by winning two mayoral posts.

Chief minister Yogi Adityanath attributed the BJP’s victory to the vision of Prime Minister Narendra Modi and the strategy of party president Amit Shah. He said that rival Congress was humbled even in the Gandhi family bastion of Amethi and the BJP will now aim for hundred per cent success in the 2019 Lok Sabha polls.

Deputy chief minister Keshav Maurya said, “The wind which began blowing in 2014 has turned into a storm. We thank the people for reposing faith in us and we will work twice as hard to serve them”.

The Congress bettered its performance by ranking number two in Varanasi, Moradabad and Mathura. The Congress won the Nagar Palika president post in Rae Bareli. Surprisingly, Asaduddin Owaisi’s AIMIM made its presence felt in the election. Its candidate Mashrur Fatima came second in Ferozabad. The Samajwadi Party’s performance was, however, grossly disappointing. The party could not win even a single mayoral seat. The party lost in its bastion, Ferozabad, where the BJP won. This was the first time that SP had contested on its election symbol.

The municipal election results are a personal victory for UP chief minister Yogi Adityanath who had addressed around 33 rallies in the state after the Opposition had claimed that the results would be a referendum of sorts on the performance of the eight-month old Yogi government.

The Opposition, meanwhile, had already given a psychological edge to the ruling BJP as SP president Akhilesh Yadav and BSP president Mayawati did not campaign even on a single day for the municipal elections. UPCC president Raj Babbar, however, campaigned vigorously for his party candidates.

The BJP, which had won 10 out of 12 mayoral seats in 2012, won the newly-created Nagar Nigams in Mathura and Ayodhya. Both these municipal corporations were recently created by the Yogi Adityanath government. Yogi Adityanath has started his election campaign form Ayodhya — a clear indication of his priority.

SP leaders created a ruckus at the Faizabad district collectorate after the announcement of results, alleging malpractices by the local administration. Gulshan Bindu alleged that the power supply had been switched off during the counting of votes.

The Bahujan Samaj Party won the Meerut and Aligarh seats. Meerut, considered a BJP bastion, has also been the home of aggressive Hindutva.

Meanwhile, elections were also held for 198 Nagar Palika Parishad (municipal councils) and 428 nagar panchayats or notified area councils. Reports suggest that the BJP has won more than 50 per cent of the seats though the final picture is expected to be known late on Friday night or on Saturday. Independents, mostly rebel candidates, have won a large number of seats.

In Mathura (ward no 56) a piquant situation arose when the Congress and BJP candidate ended up with exactly the same number of votes. The BJP candidate won when a child was made to elect the candidate through lottery. A similar situation took place in Mahoba where the winner was decided by tossing a coin.

The BJP won the newly-created Nagar Nigams in Mathura and Ayodhya. Both these municipal corporations were recently created by the Yogi Adityanath government.

SP could not win even a single mayoral seat and lost in the party bastion Ferozabad. Yogi Adityanath who had addressed around 33 rallies in the state. Akhilesh and Mayawati did not campaign even on a single day.