'Congress-NCP should be open to form government with Shiv Sena': Dalwai

In a letter written to Sonia Gandhi, Dalwai urged her to consider the prospect of Congress-NCP forming govt with Shiv Sena. 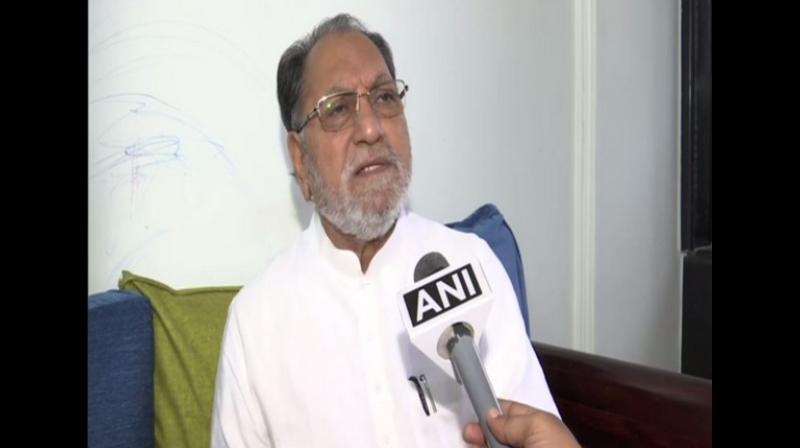 'As BJP-Shiv Sena are struggling to come together to form government, section of supporters of Congress are of opinion that Congress- NCP should be open to the prospect of forming the government with Shiv Sena,' Dalwai said. (Photo: ANI)

New Delhi: Amid delay in formation of new government in Maharashtra due to differences in the ruling alliance, Congress MP Husain Dalwai has said Congress-NCP should be open to joining hands with Shiv Sena to form a government, saying it will prevent poaching and consolidate party's base.

In a letter written to party chief Sonia Gandhi, Dalwai urged her to consider the prospect of Congress-NCP forming government with Shiv Sena.

He also said Shiv Sena has been taking a "more inclusive" stance on issues.

"As BJP-Shiv Sena are struggling to come together to form government, section of supporters of Congress are of opinion that Congress- NCP should be open to the prospect of forming the government with Shiv Sena," Dalwai said.

He alleged that Congress MLAs were "poached" by BJP before the assembly polls and it can happen again if BJP forms the government.

Dalwai in the letter talked about minorities and "agendas of BJP government" and said though Shiv Sena has shared power with BJP, it is not viewed in the same light.

"Shiv Sena is not viewed in the same light as BJP though they have shared power together in the past and this may be an opportunity from preventing this from happening again," he said.

He said BJP has not got an absolute majority on its own in the assembly polls.

"We must remember that BJP has consistently followed RSS's doctrine of one nation, one leader, one party, one religion but Shiv Sena has been seen to be taking a more inclusive stand recently. It is therefore imperative to prevent BJP from coming to power since the voters have also denied them a clear majority," he said.

The BJP and Shiv Sena, who are part of ruling coalition in Maharashtra, fought the assembly polls in alliance.

While the Shiv Sena has been insisting on a "50-50" power-sharing agreement, the BJP has said that there was no agreement between the two parties on sharing the post of chief minister for two-and-a-half years.