India   All India  02 Nov 2018  This security guard is writing letters to Kargil war heroes’ family for 20 years
India, All India 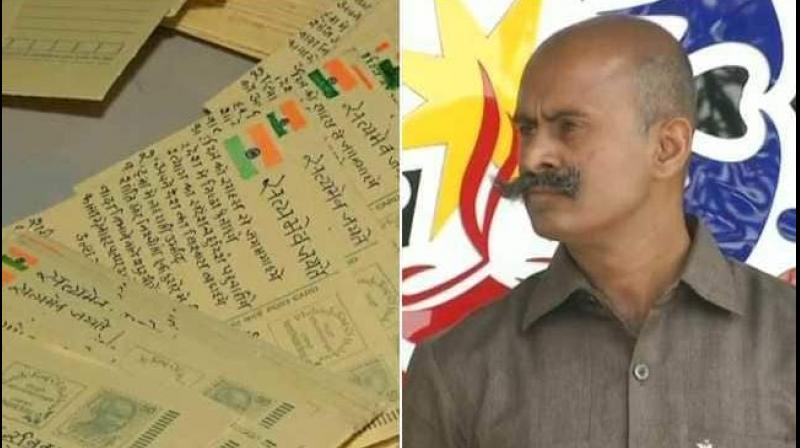 On the postcard that he sends, Jitendra Singh Gurjar carefully sketches the Indian flag and writes 'Satyamev Jayate' (truth triumphs) next to it. (Photo: Twitter | ANI)

Surat: Jitendra Singh Gurjar, a security guard at a private firm in Gujarat, has been writing letters to families of Kargil War heroes for the last two decades.

On the postcard that he sends, Gurjar carefully sketches the Indian flag and writes 'Satyamev Jayate' (truth triumphs) next to it.

Gurjar told news agency ANI that the sacrifice and valour of Indian soldiers killed in the 1999 Kargil War motivated him to write the letters.

"This is the 20th year since the Kargil was fought. Several soldiers and officers from my village were killed in it. I saw and heard the stories of their bravery which motivated me to send letters to the families of every one of those killed," he added.

A native of Bharatpur district in Rajasthan, Gurjar said he is often overwhelmed when he receives a reply for his letters. "Many families laugh and cry while most of them delve into memories of their kin on receiving these postcards," he said, adding that he has visited houses of 40-50 soldiers.

"Their families treat me like a son. I also bring sand from the compound of their houses to build a 'shaheed samarak' (martyr figurines)," he said.

The 37-year-old continued: "I read up stories of soldiers in newspapers and channels and record their data. Several of these stories are heart-wrenching. A story that I still etched in my mind is of 95-year-old Chuni Singh, who got his pension after 65 years. Another is of Lachhman Singh, whose three sons, all of whom were officers, lost their lives on the battlefield."

Gurjar maintains a register containing records of soldiers who have sacrificed their lives for the country. The stationery that he has gathered over the years weighs a massive nine quintals.

Talking about the challenges he had to face, he said, "In 2004, the rates of postcards were increased by 66 per cent. I was working at a small private school. This unprecedented increase in rates forced me to write to the Prime Minister. I still write a monthly letter to the Prime Minister urging him to reduce the prices of postcards. But no action has been taken so far."