Justices Rajan Roy and Jaspreet Singh have also called the victim's parents to have their say in court that day. 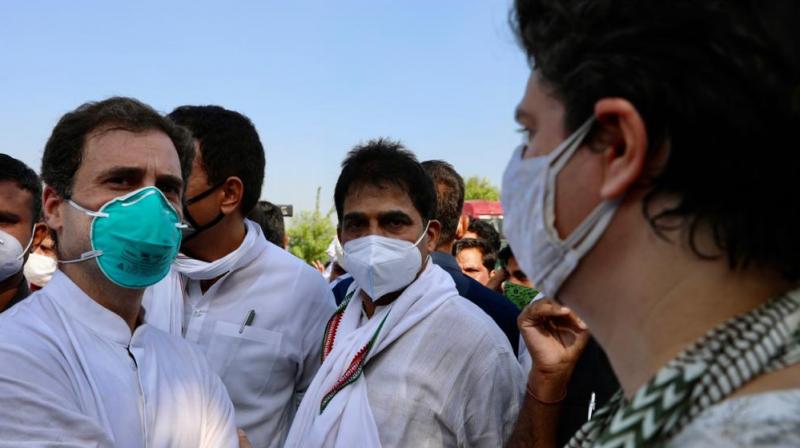 The Allahabad High Court on Thursday sent out summons to top Uttar Pradesh officials over the alleged gang-rape and death of a Dalit woman.

Justices Rajan Roy and Jaspreet Singh have also called the victim's parents to have their say in court that day.

Taking suo moto cognisance of the case, which has triggered widespread outrage, the bench also ordered Hathras district magistrate and superintendent of police to appear with to apprise the court of various aspects of the case, including the ongoing probe into it.

"The incidents which took place after the death of the victim on September 29, 2020 leading up to her cremation, as alleged, have shocked our conscience. Therefore, we are taking suo moto cognizance of the same," the bench said in its order.

The woman succumbed to the severe injuries she suffered when she was allegedly assaulted by four upper-caste men  later arrested -- in the fields at her village in Hathras district on September 14.

She was cremated in Hathras in the dead of the night with family members saying they were not allowed to bring the body home one last time. But police claimed they had the family's consent for the cremation.

Meanwhile, Congress leaders Rahul Gandhi and Priyanka Gandhi were detained by UP police in Greater Noida, just outside Delhi, when they insisted on marching to Hathras to meet the family of the 19-year-old woman.

The two leaders and about 150 party workers were held briefly and booked for violating prohibitory orders. They were let off after they furnished personal bonds. The melee on the Yamuna Expressway was the biggest among scattered protests during the day over the death of the woman, who the UP police controversially suggested was not a victim of rape.

Party workers first gathered on the road on the Delhi-Noida border, dispersing only after the convoy of cars carrying Rahul Gandhi and Priyanka Gandhi Vadra passed them.

The cars were stopped a few minutes later on the Yamuna Expressway by UP police. The Gandhis then insisted they will proceed on foot to Hathras, about 150 km away. Police tried to stop them again, citing prohibitory orders which prevent assembly of people.

At one point, a video clip showed, Gandhi taking a fall amid the melee. He was quickly helped on his feet by his security personnel. Another clip showed him challenging a police offer. "Can you tell me under which law you can stop me from marching towards Hathras?" he said.

"I want to go alone to Hathras and on what basis can you arrest me?" he said, arguing that this would not lead to any violation of section 144 of the CrPC.

The leaders were later taken away in police cars, reportedly to the guesthouse at the International Buddh Circuit, before being released.

"Have no words to condemn the barbaric & shameful incident at Hathras involving a young Dalit girl. My deepest condolences to the family. More shameful is the forceful cremation without the family’s presence or consent, exposing those who use slogans & lofty promises for votes," Mamata tweeted.

Thackeray, while addressing a virtual meeting, said that Hathras-like incidents won't be tolerated in Maharashtra and perpetrators of such crimes will be be severely punished.

In Haryana, Dalit organisations and other outfits held protests in Kaithal, Yamunanagar, Fatehabad and Rohtak. Congress workers blocked an arterial road in Kolkata and held a candlelight protest in Hyderabad.

As the events unfolded, Congress alleged that Gandhi was roughed up and other protesters faced lathis.

"Lala Lajpat Rai had said that every blow of a stick on my body would prove to be the last nail in the coffin of the British Raj.

"The sticks on Rahul ji and Priyanka ji's convoy will also prove to be the last nail in the coffin of the Yogi government," party spokesperson Randeep Surjewala said in a tweet in Hindi.

UP minister Siddharth Nath Singh was dismissive of the "photo op", questioning even the fall suffered by Gandhi.

The BJP also accused the Congress leaders of ignoring atrocities in the states ruled by that party.

Uttar Pradesh Congress gave a call for a statewide protest on Friday against the detention of Rahul and Priyanka Gandhi. All district and city unit presidents were asked to hold immediate dharnas against the behaviour of the UP police which had detained the leaders.