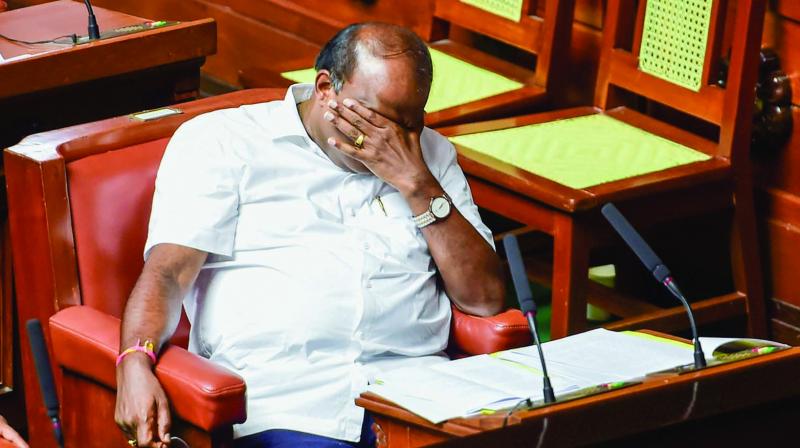 The report also has made several suggestions to the party aimed at strengthening the organisations, selection of office bearers, among others. (Photo: AP)

Bengaluru: A fact-finding committee of the Congress in Karnataka has squarely blamed the party's alliance with the Janata Dal Secular (JD(S)) for its rout in the 2019 Lok Sabha polls.

In its report submitted to the state congress chief Dinesh Gundu Rao in Bengaluru on Tuesday, the panel also said anti-incumbency against Siddaramaiah-led Congress government was not the reason for the party facing a setback in 2018 Assembly polls, and cited issues like religion and personal matters of certain leaders.

About 17-20 per cent votes swung towards BJP. In constituencies where JD(S) was strong and had MLAs, votes did not come to Congress, which clearly shows people did not accept the alliance, he said. Congress votes remained with the party, and JD(S) votes did not shift to Congress, but instead swung towards the BJP, he said, adding that there was also lack of coordination among workers.

After the drubbing in the Lok Sabha polls, the Congress' Karnataka unit had formed a fact-finding committee to find the reasons for the party's poor show in both parliamentary and 2018 Assembly elections.

The five-member committee was headed by the state PCC vice-president and former legislative council chairman VR Sudarshan and former minister Basavaraj Rayareddy. The committee in its district wise-report is said to have gone into details regarding party and alliance candidates loss in each constituency.

According to a top party source privy to the details of the report, the committee has cited alleged high-handedness of former minister Priyank Kharge in local party affairs, for his father and veteran Congress leader Mallikarjun Kharge's defeat in Gulbarga Lok Sabha seat, as it antagonised several party leaders there.

The committee has cited consolidation of Linagayat votes against former prime minister HD Deve Gowda for his defeat in Tumkur and dynasty politics of Gowda family for his grandson Nikhil Kumaraswamys defeat in Mandya, according to sources. Internal rift between party leaders led to senior Congress leader KH Muniyappas loss in Kolar Lok Sabha seat, they said.

Gowda and Nikhil were Lok Sabha candidates from JD(S), which was supported by the Congress. The Congress, which fought the Lok Sabha polls in alliance with the JD(S), won only one of 21 seats it had contested.

The JD(S), too, won in one of seven seats in which it was in the fray.

Steamrolling the ruling Congress-JD(S) alliance, the BJP had scored a resounding win by bagging 25 of the total 27 Lok Sabha seats it had contested, while an independent candidate supported by the party had won in Mandya.

This was said to be worst ever performance by the Congress in Karnataka and a record of sorts by BJP for which the state emerged as the bright spot in the South with other neighbouring states bucking the "Modi magic".

Regarding Assembly polls, Rayareddy said though the party got less number of seats compared to BJP for various reasons in the 2018 polls, Congress was still popular in Karnataka and there was no anti-incumbency against the Siddaramaiah-led Congress government, which was in power at the time of polls.

The committee members travelled to every district, conducted Assembly constituency-wise meetings and contacted party leaders from booth to state level, to find reasons for the Congress' defeat and gathered suggestions from them about organising the party for the future.

It is a 63-page report after three-month long tour across the state and collecting inputs from all the Assembly constituencies, committee member Sudarshan said.

The report also has made several suggestions to the party aimed at strengthening the organisations, selection of office bearers, among others.

Speaking to reporters after receiving the report, Dinesh Gundu Rao said, the report is not to target any individual, but for the benefit of the party. He said it will be circulated among top leaders and they will discuss and decide on the future course of action.