Priyanka Gandhi to take out 'Padyatra' to support law student

The Gandhi scion along with party workers is set to take out the padayatra at noon from Shaheed Smarak to the GPO Park. 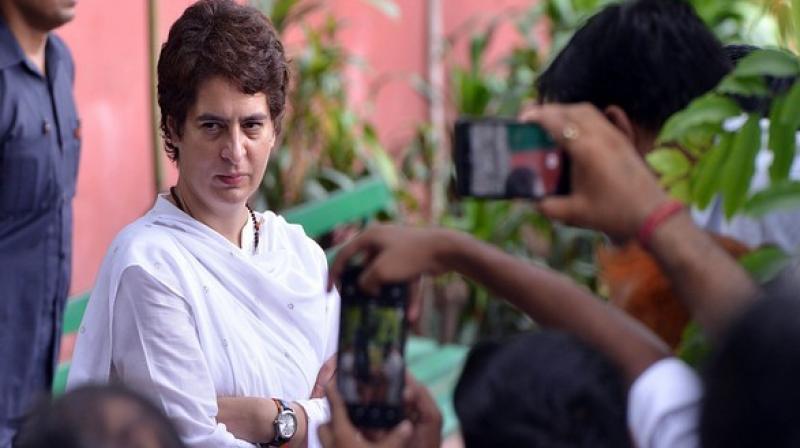 Priyanka will also pay homage to Mahatama Gandhi on his 150th birth anniversary at the GPO Park here. (Photo: ANI)

Lucknow: A day after it was stopped from taking out a march in support of law student, who has accused BJP leader Swami Chinmayanand of rape, Congress General Secretary Priyanka Gandhi Vadra is set to lead a 'padayatra' on Gandhi Jayanti in Lucknow on Wednesday.

The Gandhi scion along with party workers is set to take out the padayatra at noon from Shaheed Smarak to the GPO Park.

She will also pay homage to Mahatama Gandhi on his 150th birth ann iversary at the GPO Park here.

After 1:30 pm, Priyanka Gandhi Vadra will head towards Congress party office where she will hold discussions with the volunteers about the party and development.

Yesterday, she slammed the administration for preventing Congress workers from taking out a protest march in the support of the law student. "Criminals in UP have the protection of the government so they can intimidate the rape victim," Gandhi said in a tweet in Hindi.

"The UP BJP government wants to suppress the voice seeking justice for the daughter of Shahjahanpur. The padayatra is being stopped. Our workers and leaders are being arrested. What is there to be afraid of?" the Congress general secretary in-charge UP East said.

The law student was on Wednesday arrested on charges of extortion and has been sent to 14 days judicial custody. Just hours later, her bail plea was also rejected by the judicature.

The accused Chinmayanand has also been sent to judicial custody after his arrest. He has been booked under section 376C of the Indian Penal Code (IPC), a charge with lesser punishment than rape.