The Congress interim president said that Gandhi ji was known for non-violence and not dictatorship. 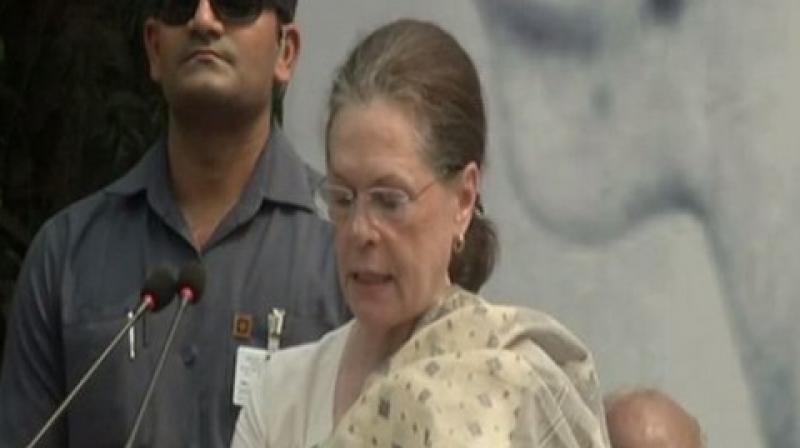 Sonia concluded by saying that the Congress party has been following Mahatma Gandhi's path and it will continue to do so in the future. (Photo: ANI)

New Delhi: Congress interim president Sonia Gandhi in a veiled dig at the BJP-led Central Government on Wednesday said that the latter wants to sideline father of Nation Mahatama Gandhi and make Rashtriya Swayamsevak Sangh (RSS) as the symbol of India.

"Some people are trying to sideline Mahatma Gandhi and make RSS a symbol of India," Sonia said addressing Congress workers at Rajghat on the occasion of Gandhi Jayanti.

"Quoting Gandhi is easy but it is very tough to follow the path shown by him. Those who are trying to use his name are openly misguiding others about Gandhi to portray themselves as the most powerful. However, they failed in their attempt as India's basic structure is laid on Gandhi's principals," she said,

The Congress interim president said that Gandhi ji was known for non-violence and not dictatorship.

"Those who think power is in their hands will never understand Gandhi ji's swaraj and selfless love for the country and its people. Gandhi ji stands for love, not hate, he is for democracy and not dictatorship," she said.

Asserting that Congress has been following the path shown by Gandhi ji, she said, "After independence, Congress tried to bring revolution in the country. Be it Nehru, Rajiv, Narsimha or Manmohan Singh everyone worked effortlessly to bring developmental changes in the country."

She further hit out at the Centre for economic slowdown and rampant unemployment. "We brought opportunities for employment, facilitated farmers with new technology, brought education for all. But in the last 5 years, India's condition has reached to such extent that even Gandhi's soul is hurt."

Taking cognisance of sexual harassment and rape cases in the country, she said that women in villages and cities are not secure. "Those who attack them are in comfort while victims are being sent to jail," she said.

Sonia concluded by saying that the Congress party has been following Mahatma Gandhi's path and it will continue to do so in the future.