BJP Chief said, 'If Rahul dreams about Gujarat then he should visit Porbandar, not Italy for fulfilling those dreams.' 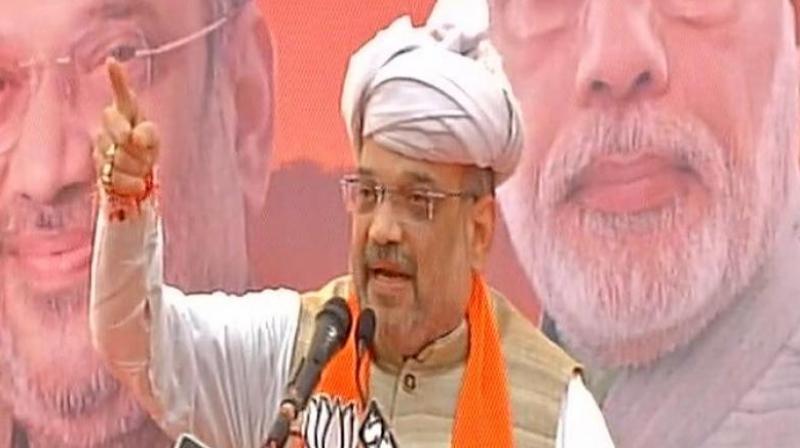 Speaking at 'Gujarat Gaurav Yatra' in Porbandar BJP Chief Amit Shah said, 'Rahul always questions what Prime Minister Narendra Modi did in past three years, but I want to ask what UPA did in 10 years.' (Photo: ANI | Twitter)

Porbandar: Bharatiya Janata Party (BJP) chief Amit Shah on Sunday launched a fresh salvo on Congress vice president Rahul Gandhi saying that the latter need to wear Gujarati spectacles to see the development of Gujarat and not the one made in Italy.

"If Rahul dreams about Gujarat then he should visit Porbandar, not Italy for fulfilling those dreams. He should wear Gujarati spectacles and not the one made in Italy, only then he will see the development in Gujarat," Shah said while speaking at 'Gujarat Gaurav Yatra' in Porbandar.

He said the Congress Party opposing Gujarati should know that Gujarat used to get 43,345 crore under United Progressive Alliance (UPA) and is not getting 1,22,453 crore under National Democratic Alliance (NDA) Government.

"Rahul always questions what Prime Minister Narendra Modi did in past three years, but I want to ask what UPA did in 10 years," Shah asked.

He said the 'Gujarat Gaurav Yatra' has been started as Gujarat is proud of Mahatma Gandhi, Sardar Vallabhbhai Patel, and Prime Minister Modi who were born in this land.

He added that the party is taking pride of making Gujarat a curfew-free state and providing 24 hours electricity in the state.

The yatra will go on till October 15. It will be held on two routes simultaneously.