Officials hope peace will return on campus when it reopens on October 3. 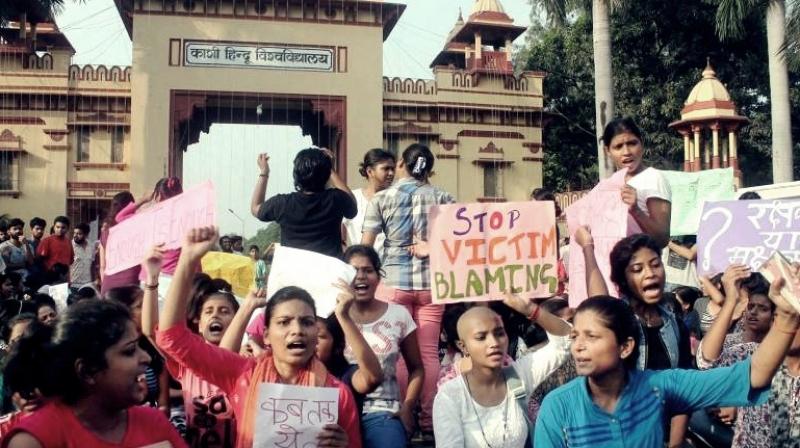 Students protesting against the BHU authorities alleging inaction in a case of sexual harassment.

Varanasi: A stubborn vice chancellor with a political leaning, distressed students, disturbed faculty members and an 'over-stressed' police force made a heady cocktail on September 23 when the Banaras Hindu University (BHU) turned into a communal cauldron of violence.

A week after the incident, the BHU campus now wears a barren look, but the police barricades serve as a grim reminder of all that has taken place. When the university reopens on October 3, the administration hopes that peace will return to the campus. On their part, the students are determined to continue with their agitation, while the V-C is ready to crush the spirit and voice of the students.

September 22 was a day like any other in BHU. A young girl after enrolling in BA course was returning to her hostel in the evening, when three men on a motorbike accosted her and groped her near Bharat Kala Bhawan in Varanasi. Security personnel standing at a short distance looked away, while the men gleefully sped away.

The girl narrated the incident to a BHU proctorial board member, who instead of comforting her, asked, “But what were you doing out there after sunset? You are only inviting trouble." The offended girl went back to the girls’ hostel and told her hostel mates of the incident.

Other hostellers later joined the victim in protesting against the incident and demanding better security on campus. They wanted to meet the BHU vice chancellor, but he was reportedly ‘busy’ and refused to meet them. Prime Minister Narendra Modi was on a two-day visit to Varanasi constituency from September 23.

Some of the girls were so upset with the BHU administration’s negligent attitude that they tonsured their heads. “We have tonsured our heads as now no man will find us beautiful. Our teachers feel we attract trouble because we are attractive. Is it our fault?” asked Akansha Singh, one of the girl students who had tonsured her head.

By Saturday morning, the boys too had joined the girls and tension swelled up on the campus, but the BHU administration could not care less.

“The students were fast losing patience and the tension on the campus was palpable, but the BHU administration was busy attending the PM’s functions and getting into his good books,” admitted a BHU faculty member.

The Prime Minister left on Saturday evening (September 23), but the BHU vice chancellor still did not find time to talk to students and late in the night, the situation turned volatile as the students clashed with the cops.

The police personnel didn't think twice before lathi charging the girl students. Immediately, the mob went on a rampage and the BHU vice chancellor claimed they were “outsiders” who wanted to burn down the campus. One of the police officers who has been shifted after the incident, admitted, “Most of the cops had been on their feet for more than 72 hours at a stretch due to the PM's visit. They were over stressed and went a little overboard in dealing with the situation."

Pratima Gond, assistant professor of sociology at the Mahila Maha Vidyalaya, BHU, recalled she was assaulted by the police, while she was trying to save a student from being attacked. Other teachers are  silent though some of them indicated in muffled voices that caste politics on the campus was also responsible for vitiating the atmosphere.

Litterateur Prof Kash-inath Singh, former BHU professor, said, “I have been a faculty member in BHU for 32 years and have seen the university for 64 years. This is the first agitation that has been led by girls. The girls were well within their rights to want to talk to their MP, who happens to be the Prime Minister, because the vice chancellor and the local administration did not have the time. Is this Beti Bachao, Beti Padhao?"

Another BHU old timer and senior SP leader Anjana Prakash said, “It is sad to see what the BHU has been reduced to. It is almost a week since the incidents took place, but no one has even bothered to identify and arrest the men who molested the girl. This should have been the first task of the police. This is not the BHU I knew."

Shashi Singh, a BHU student who is staying in Sigra area with her local guardians after the hostel was vacated, wanted to know what action had been taken against those security personnel who looked on while the girl was being molested. “They are the biggest offenders," she said.

BHU vice-chancellor Prof G.C. Tripathi, after his return from Delhi,  remained unrelenting in his stand. “I maintain that there was no lathi charge on our students. Those responsible for violence were outsiders and I called the police to save the campus form their attack. Besides, I do not want to talk to the , which has formed its own opinion,” he said.

BHU spokesperson R.K. Singh alleged that the girls were instigated by those who were ousted from the varsity in previous incidents of violence in the past. He alleged that the protest was "politically motivated" and it was timed with the PM's  visit.

Uttar Pradesh Congress Committee president Raj Babbar who reached Varanasi on Sunday,  was prevented from going to meet the students in BHU . He said, “This is short of state sponsored terrorism. The Prime Minister is the MP of Varanasi. He should have intervened in the matter. The chief minister was also present in Varanasi and yet the BHU administration and the cops went berserk. This is not  democracy."

A week after the incidents, the BHU campus now wears a barren look but the barricades serve as a grim reminder of all that has taken place.

When the BHU reopens on October 3, the administration hopes that students’ aggresion would have subsided.

However, students are determined to continue with their agitation of the vice chancellor or other officials  attempt to crush the spirit and voice of the students.

While the Crime Branch has started making a sketch of the accused who allegedly molested the main victim, the BHU’s first woman proctor Royana Singh has assured steps to increase interaction with students.