Alcoholism is destroying the culture of Leh

Many people — particularly men — now spend a major part of their earnings on alcohol, sometimes accompanied by violence and assault. 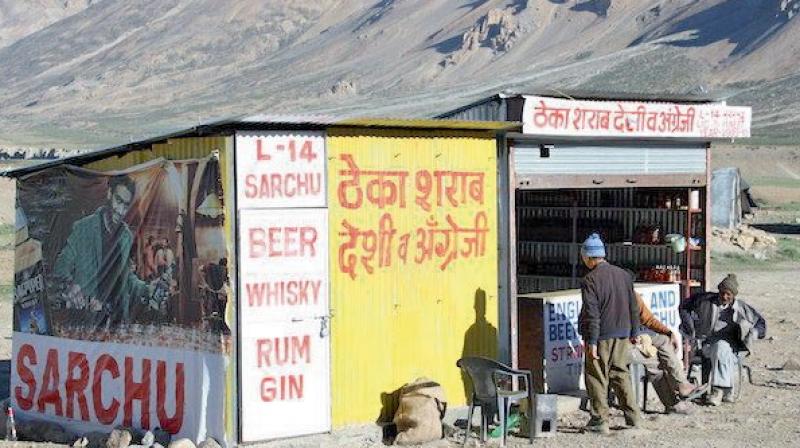 An alcohol shop in Leh

A ground survey of the locals in Leh town revealed that traditional patterns of drinking of chhang (barley liquor) and in the rarest case aaraak (rice liquor) had gradually been replaced by consumption of commercial beer and rum at more frequent intervals and with more negative social consequences.

Leh town offers access to large supplies of commercial alcoholic beverages in liquor stores and bars, where they can buy as much as they can afford. Kunzang Angmo, 29, whose father is an ex-serviceman says: “No matter what, my father will make sure he avails his monthly quota of subsidised alcohol from the Army canteen. Generally he drinks in moderation but sometimes particularly when he has company he drinks heavily. Then he starts abusing the family. My kids are frightened to see him drunk and often ask me why mamaylay (grandfather) becomes a monster sometimes.”

Many people — particularly men — now spend a major part of their earnings on alcohol, sometimes accompanied by violence and assault. The survey also revealed that beer is now the most common beverage consumed mostly among the Ladakhi youth. Jigmet Namgyal, 25, a moderate drinker himself, mentions: “Beer is available all the time except on dry days, whereas chhang had to be ordered or prepared in advance, also beer has its presence in every small gathering or event. On the other hand, chhang is present mostly during large events such as weddings and funerals. Therefore, the youth are more inclined towards drinking beer mostly owing to its easy availability.” His friend, Stanzin Dorjey, 24, discreetly states: “Despite being far more expensive than the locally brewed chhang, people tend to drink more of Western liquor mainly because of an enhanced purchasing capacity of the locals largely because of tourism and exposure to outside culture.”

Morup Dolma, president, Women Alliance Ladakh says: “Earlier chhang was the only liquor in Ladakh and people used to consume it during most of the social gatherings. However, with the introduction of Western hard drinks things have changed and so have people’s attitude towards drinking. Now people, specially the youth, indulge in binge drinking after which they lose sense of who they are and what they do.” She thinks that the menace of alcohol is plaguing the Ladakhi youth and is a big threat to the social and economic wellbeing of Ladakh. “We conduct surprise raids in places where we suspect illegal sale of alcohol. Yet this practice does not guarantee a complete ban on alcohol accessibility. Moreover, we cannot stop established licensed bars and liquor shops from selling alcohol, yet it is possible to stop these from being established in the first place. For example, Changspa, one of the most popular tourists hubs in Leh with probably the maximum number of hotels and guest houses, has no bar or liquor shop in its vicinity. This is possible purely because of the strict intervention taken by residents of Changspa against setting up of bars and liquor shops.”

Other than proving as a threat to the drinker and his immediate surroundings, heavy consumption of alcohol can affect work performance in several ways such as absence from work because of more frequent sick leaves, work accidents, low productivity because of problems in personal relationships and lack of self-direction. Kunzang Chorol, 45, says, “My husband is in the Army, he became an alcoholic while in service and things got so bad that he would often stay off duty. This started affecting his health and productivity at work. As he would spend all his salary on alcohol, his contribution towards the functioning of the family came to a standstill and it was hard for me to pay school fees of my two daughters. This is where the higher authorities from the Army stepped in and they helped me transfer a share of his salary directly into my daughter’s account.”

Parental drinking can lead to child abuse and numerous other impacts on the child’s social and mental wellbeing. Tsering Dolma, (name changed on request of anonymity), 47, a government teacher says: “Since I am stationed at a village which is some 150 km away from Leh town and my kids and husband live in Leh, in my absence, my husband has turned to gambling and alcohol. This worries me a lot because it is not a good example for kids. Besides, it is a huge economic drain on the family.” She swiftly adds, “All my three kids are boys, two of them adolescent, it scares me to death that my kids might inculcate the habits of drinking and gambling from their father. Also drinking outside the home means less time spent with children at home, that has affected my children’s performance at school.”

However, there are local bodies and institutions in Ladakh that are sensitive towards the changing alcohol consumption habit. For instance, Ladakh’s Buddhist Association’s Women Wing, Women Alliance, Police Department, Leh and volunteer doctors have been sensitising and spreading awareness amongst the villagers across Ladakh about the menace of alcohol. It is heartening to see that the most effective interventions are initiated, planned and implemented by the Ladakhi community. These local communities have already demonstrated that they are both sensitised to the problems alcohol has created in their culture and are willing to take action to gain order and harmony within their communities. For example, the Ama Tsogspa (Mother’s Alliance), in almost every village in Leh district has an eye on the way alcohol is influencing people and culture. Some Ama Tsogspas in few villages have been successful in banning rum and beer during weddings and other social gatherings and some have been successful in putting a cap on the quantity of alcohol being consumed. There is also an alcohol de-addiction centre located in Mahabodhi Karuna Hospital, where counsellors and psychologists guide them to participate in activities such as indoor games and engage in conversations with each other.

But there is still a long way to go before Ladakh gets back to its sober self.