The Supreme Court, which proactively supervised the process of NRC preparation from 2013, has not heard the matter since January 6 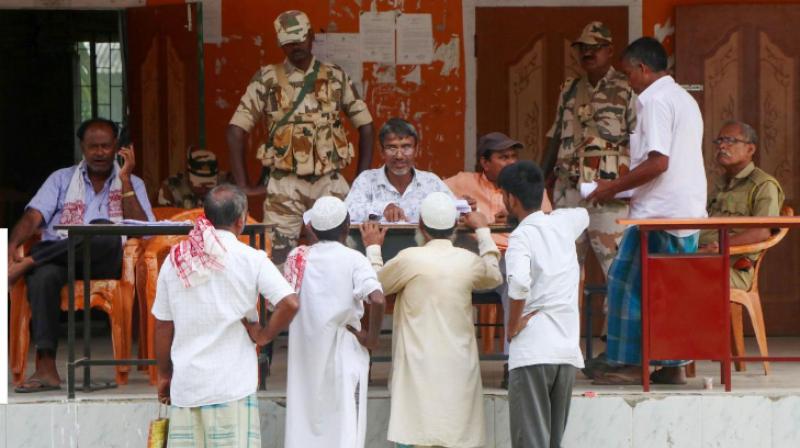 People to check their names on the final list of the National Register of Citizens (NRC) in Kamrup. (PTI Photo)

Guwahati: Fate of over 19 lakh people whose names were excluded from the National Register of Citizens (NRC) in Assam continues to hang in balance with the process of issuing rejection slips to those left out yet to start and Assam government reiterating its stand for 10-20 per cent re-verification of names included in the final National Register of Citizens (NRC) published last year.

Assam agriculture minister Chandra Mohan Patowary while responding to a question in the state assembly on status of NRC said, “We had given an affidavit in the Supreme Court saying that there should be re-verification of 20 per cent included names in the districts bordering Bangladesh and 10 per cent in the rest of the districts.”

Sticking to the stand of the party and government he further said, “We need a re-verification because people of Assam want a correct NRC.”

It is significant that about 19 lakh applicants were left out of the NRC. The NRC process has hit a stonewall as the rejection orders to the 19 lakh excluded persons which will allow them to appeal against the exclusion in the Foreigners’ Tribunals is yet to be issued. The NRC authorities have cited the Covid-19 pandemic as a reason for the delay.

The Supreme Court, which proactively supervised the process of NRC preparation from 2013, has not heard the matter since January 6.

In July last year, the Assam government and the Centre had petitioned the Supreme Court for such a re-verification exercise, but it was dismissed by the apex court after then NRC coordinator Prateek Hajela submitted that re-verification of 27 percent names was already done.

The Supreme Court had mentioned the prospect of sample re-verification in an order in 2018, saying that the court could consider re-verifying 10 per cent of the names included in the second draft of the NRC.

A total of 425 people are currently lodged in the six detention centres in the state.