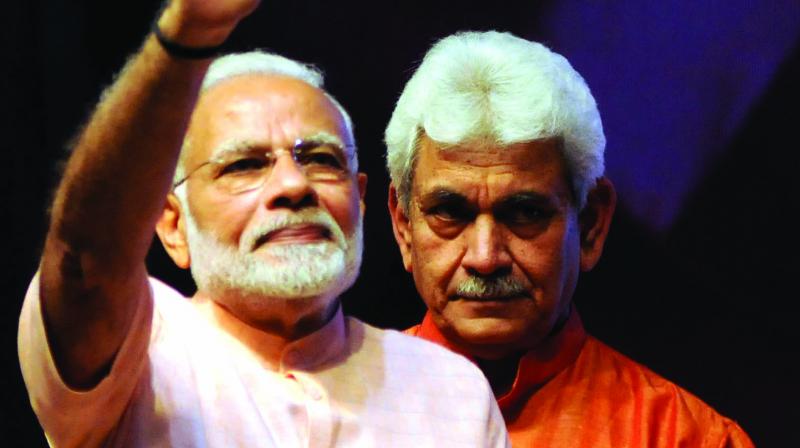 New Delhi: Blaming the “phone-a-loan” scam under the previous Congress-led UPA government for leaving the economy on a “landmine”, Prime Minister Narendra Modi on Saturday said loans handed out by banks to select businessmen after phone calls made by “namdars” (dynasts) created the bad loan mess, but vowed to recover every penny from defaulters.

Speaking at the launch of India Post Payments Bank (IPPB), an initiative that will take banking to the doorstep of every citizen through an unmatched network of post offices and almost three lakh postmen and “grameen dak sewaks”, Mr Modi said none of the 12 top defaulters who, between them, account for over `1.75 lakh crore of banks’ non-performing assets (NPA) were given loans by the present government.

He said while the previous UPA government hid the bad loans, his government has properly recognised them and brought tough laws to deal with default and recover the dues.

The Prime Minister said that the country was cheated when the last government fudged figures and put the bad loan amount at Rs 2-2.5 lakh crore when it actually was Rs 9 lakh crore. Mr Modi’s remarks came days after Congress president Rahul Gandhi attacked the Modi government for NPAs jumping to Rs 12.5 lakh crore from Rs 2.5 lakh crore under the UPA regime.

Mr Modi said that when his government came to power in 2014 it noticed that public sector banks had been plundered and bank loans jumped to Rs 52 lakh crore from 2008 to 2014 from just Rs 18 lakh crore in the previous six decades.

“The phone banking of Congress and its ‘namdars’ caused a lot of damage to the country,” said Mr Modi and added that banks obliged “namdars” because top executives were appointed by them.

“Despite knowing that the loans would not be returned, banks lent money... And when these borrowers started defaulting, pressure was mounted on banks to give them more time and then restructure these loans by giving more funds... In 2014, after our government was formed we realised that the Congress and ‘namdars’ had put India’s economy on a landmine,” he said.

Mr Modi said his government has “defused” the landmine placed by the government of “namdars” and its results have been witnessed in the 8.2 per cent GDP growth clocked in the first quarter of the current fiscal, which he said is “proof of growing strength of the 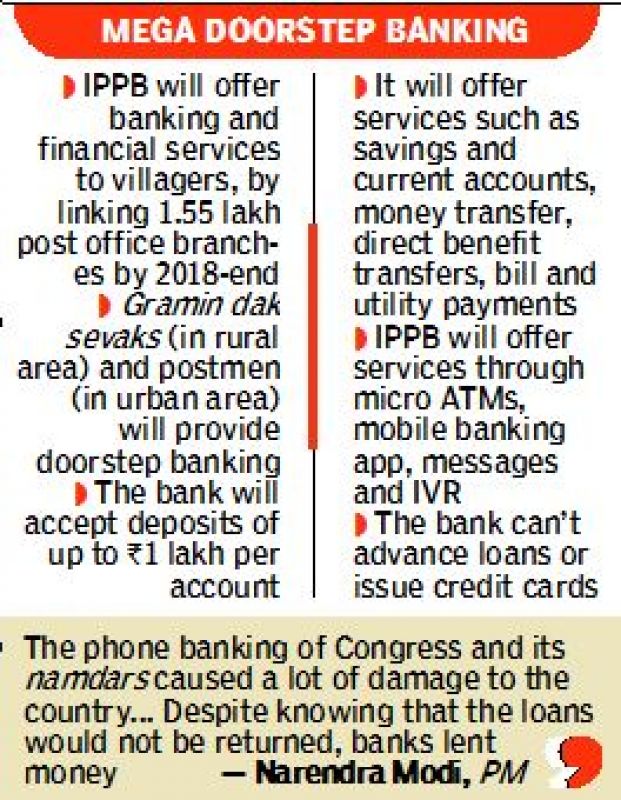 Indian economy and that the country is moving in the right direction”. Listing out the steps taken to check bad loans, he said every loan of over Rs 50 crore has been reviewed and it is being ensured that the rules are followed and recoveries made. The merger of banks has been proposed, professionalism has been brought in banks, insolvency and bankruptcy code has come and a law to deal with fugitive defaulters has been introduced.

Mr  Modi said swift action is being taken to recover loans from the top 12 defaulters as well as another 27 who owe Rs 1 lakh crore to public sector banks.

“We will ensure that every penny is recovered... I want to again assure the country that of all these big loans, not even a single loan has been given by this government,” he said.

Mr Modi said that while the “Jan Dhan” scheme of his government gave bank accounts to people who were outside the banking system, the IPPB would taking banking to their doorstep.

With its unmatched network of 1.5 lakh post offices and over three lakh postmen and gramin dak sevaks, IPPB will, initially in 650 districts, allow savings as well as current accounts to be opened on the doorstep, allow fund transfer and payment of utility bills. Also, loan and insurance will be provided in association with other banks and financial institutions. Congratulating the Prime Minister for launching “one of the most innovative financial inclusion initiative in independent India”, BJP president Amit Shah said the initiative has “revived and given a completely new dimension to India Post.”

“The postman, who we all have fond memories of, will now deliver last mile banking to the unbanked in far flung remote rural areas and bring them in the main stream. Economic independence is the first step towards empowering people and Modi sarkar is leaving no stone unturned to achieve that,” Mr Shah tweeted.

Assam chief minister Sarbananda Sonowal said while the “Digital India” campaign has changed lives of millions across the nation, the IPPB will take the initiative to the next level by empowering rural populace with banking services at their doorsteps.

He also informed that 26 branches of IPPB have been started in Assam on Saturday and within December, the service will be taken to customers via 4,011 branches and access points and out of these, 93 per cent access points will be based in rural areas.