The PLA’s 90th anniversary stamps the symbolic importance of the PLA’s authority in China’s political spectrum. 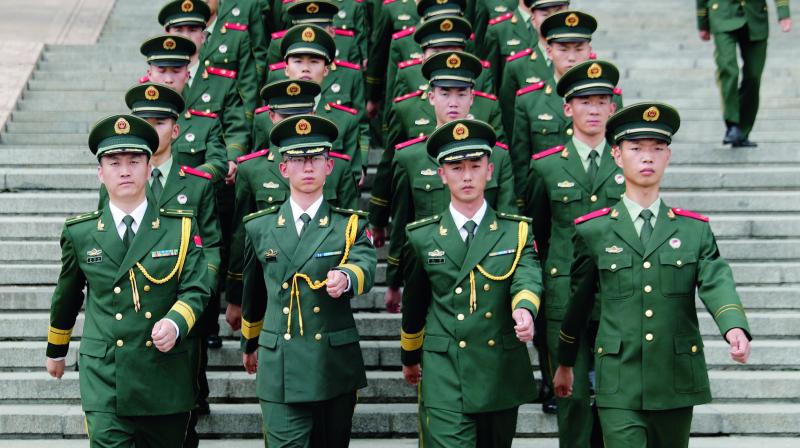 Chinese paramilitary policemen march outside the Great Hall of the People after attending a ceremony to commemorate the 90th anniversary of the founding of the People’s Liberation Army in Beijing on August 1. (Photo: AP)

Of late, China has been particularly aggressive against India over their current border standoff in the Doklam region of the China-India-Bhutan tri-junction area. The People’s Liberation Army (PLA) has warned that Beijing would defend its territorial sovereignty “at all costs” and India must cease provoking the tension. Cautioning India further to pull out its troops from “Chinese territory”, what it calls the Donglang region of China, the PLA had stated that India must understand that “it’s easier to shake a mountain than the PLA”.

The Doklam standoff was triggered due to the PLA’s road construction activity in the region, from which Indian troops along with the Royal Bhutanese Army urged the PLA to desist as it was a disputed area. India’s understanding on the matter with Bhutan to dissuade the Chinese military from road construction further heightens the PLA’s anger. Now the PLA is making the Doklam border tension a “national prestige” issue, on the occasion of its 90th anniversary, by linking it with China’s sovereignty.

The PLA’s 90th anniversary stamps the symbolic importance of the PLA’s authority in China’s political spectrum. The upcoming 19th National Congress of the Communist Party of China (CPC) in October marks another grand occasion for the PLA to express its century-long loyalty to China’s political class. The 19th Congress will confirm the continuation of Xi Jinping for a second term as President. The Congress will witness the retirement of vice-chairman Fan Changlong and the elevation of Xu Qiliang in the Central Military Commission (CMC), among many other new appointments. This is an opportune moment for the PLA, which wants to have a better representation in China’s political system.

The PLA’s “sovereignty” assertion over India is intended to improve its public image domestically ahead of the 19th CPC Congress, and also to urge for a better partaking for itself in China’s decision-making process. “Defending China’s sovereignty” has been a catchphrase of the Chinese military and political leaderships in the recent past. A clue to this is noticed in Xi Jinping’s recent assertion in Hong Kong, on the occasion of the 20th anniversary of Hong Kong’s passing from Britain to China, where he stated that “challenging Chinese sovereignty is equivalent to crossing the red line”. 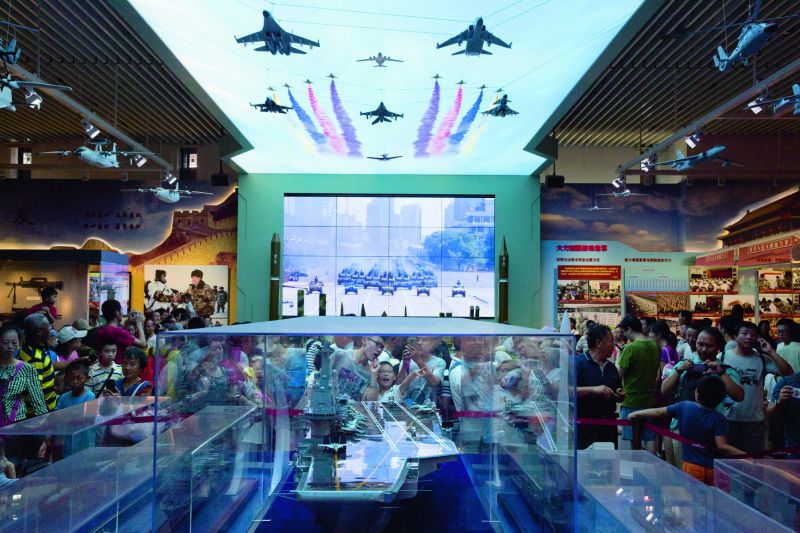 Visitors look at a scale model of a Chinese aircraft carrier during an exhibition at the military museum in Beijing.

As the CPC’s backbone, the PLA has had a long march of history in helping the party not only to sustain power in China but also compellingly claiming the country’s territorial and maritime ambitions. Since its inception on August 1, 1927, the PLA has undergone many years of changes and reforms while protecting China’s national interests, without really challenging much the CPC’s supremacy. The PLA’s role seems to be an integral part of Xi Jinping’s national effort of building a “moderately prosperous society”. The 2016 reforms and restructuring, which were comprehensive and the largest in recent years, have further accentuated the PLA’s role under Xi Jinping, offering it a much-required autonomy in influencing decisions concerning national security and sovereignty. Condensing the earlier seven Military Area Commands (MACs) into Five Theatre Commands, upgrading the Second Artillery Force as a full-fledged PLA Rocket Force, making the newly established ground forces act autonomously, and making the PLA’s command and control system more flexible were all parts of this radical reform and restructuring. These reforms were carried out not only to redefine the “relationship authority” among different units and commands within the PLA but also to empower the decision-making process where the PLA leadership can play a decisive role on national security issues. China’s sovereignty assertion over India on the Doklam border tension draws from this growing PLA profile.

The PLA today plays an increasingly persuasive role in China’s India policy. Given India’s longstanding boundary dispute with China, the PLA has been instrumental in designing Beijing’s neighbourhood strategy while becoming vigilant over India. The elevation of Tibet’s military command rank, which is now placed under the direct supervision of the PLA ground forces, explains this growing persuasiveness. A fundamental reason behind this upgradation was to consolidate China’s military build-up in the Tibetan region, posing a direct strategic advantage over India. The PLA’s Western Theatre Command controls the Tibetan Military Command. Its headquarters are stationed at Chengdu in the Sichuan province bordering India. This allows the PLA to tighten military control over the China-India border affairs than earlier. Ahead of its 90th anniversary, the PLA has recently conducted a military drill in the Tibetan plateau, signalling its preparedness. This kind of elevation allows Tibet’s military command to have greater control over the military resources than before, and importantly, to possess a greater degree of say in the boundary negotiation process with India.

The PLA’s “sovereignty” assertion over the Doklam border tension with India is not an isolated occurrence altogether. Beijing’s larger message here is to countries like Japan on the Senkaku island dispute and to the South-East Asian countries on the South China Sea dispute. The PLA’s “sovereignty” assertion is attached with a grand Chinese strategy to change the status quo on the ground gradually, which is a classic Chinese strategy. The land border dispute with India suggests how systematically China has made India’s sovereign state of Arunachal Pradesh a “disputed territory”, by exerting a claim on it and making its campaign forcefully public. Terming Arunachal Pradesh as a “complex historical chapter” in the China-India border dispute, public opinion in China today is keen on taking a strong position on Arunachal Pradesh. A similar trait is noticed in China’s approach towards the South China Sea dispute, where the PLA has enhanced its claim through land reclamation and militarisation effort. Similarly, ignoring Japan’s rightful possession over the Senkaku islands, Beijing has expanded its claims and exerted pressure on Japan to resolve the issue by making it a maritime territorial sovereignty issue.

Though China’s military build-up has been intended over the years to dissuade the United States’ capability of supporting Taiwan and coerce the latter into reunification, the PLA has invested most of its recent resources focusing on issues like the South China Sea dispute, East China Sea dispute and China-India boundary dispute. Each of these issues has been projected as China’s national sovereignty issue, exhibiting an assertive PLA’s post-reform strategy under Xi Jinping, which is more neighbourhood-specific.

The writer is a research fellow and head of the East Asia Centre at the Institute for Defence Studies and Analyses, New Delhi