While about Rs 7.9 crore cash has been recovered from Delhi, about Rs 2.23 crore has been found at locations in the southern state. 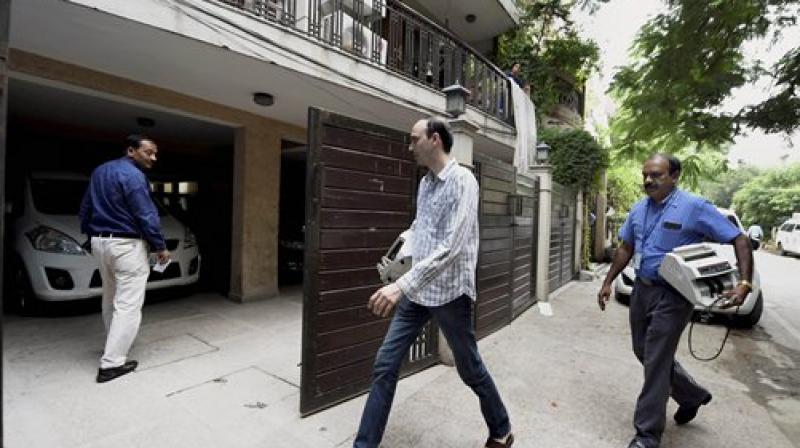 Bengaluru: The Income Tax Department on Wednesday conducted searches at 64 locations and properties linked to Karnataka Energy Minister D K Shivakumar, who was overseeing the stay of 44 Congress MLAs from Gujarat at a resort near here, in connection with a case of alleged tax evasion.

I-T officials said about Rs 10 crore cash has been recovered during the raids at various properties linked to the minister, who was taken to his house in Bengaluru from the resort by the taxman early on Wednesday.

A "good amount" of jewellery has also been recovered from a teacher's locker in a college here. The locker is in the name of a relative of Shivakumar, they said.

About half-a-dozen note-counting machines have also been brought at two locations in Safdarjung Enclave in Delhi and in Hasan and Mysuru in Karnataka to count the cash.

While about Rs 7.9 crore cash has been recovered from Delhi, about Rs 2.23 crore has been found at locations in the southern state.

Officials privy to the action said the department is investigating Shivakumar in a case of alleged tax evasion and huge undisclosed investments in real estate and other sectors.

Certain investments linked to him in Singapore and few other foreign locations are also under the scanner of the department, they said.

Some shell firms and their operatives allegedly linked to this case are also being probed, they added. They said the I-T sleuths reached the Eagleton resort near here to question the minister, who was staying at the resort for the night after arriving late night to the Karnataka capital from Delhi.

Shivakumar, who was in charge of the 44 MLAs lodged there to prevent the BJP from allegedly "poaching" them, was at the resort when the search took place, the I-T officials said.

They said the department has prepared a 'panchnama' where the minister was allegedly found "tearing" pages of some loose paper sheets, when the taxman came calling at the resort.

"The torn sheet, restored partially, is now being analysed," an official said.

As the raids on the resort triggered angry reactions from the Congress, the I-T department said the resort is not being raided.

They said only the minister's room in the resort was "searched" and not of the MLAs from Gujarat.

Senior Congress leader Ahmed Patel, who is contesting the Rajya Sabha polls from Gujarat, slammed the I-T raids on the Karnataka minister and accused the BJP of indulging in an "unprecedented witch-hunt" to win one Rajya Sabha seat.

IT officials said a total of 39 premises of Shivakumar and his family are being raided by a team of about 120 Income Tax Department officials with the aid of central paramilitary
forces.

Twenty five other locations and premises are being a surveyed under certain sections of the Income Tax Act. The action is taking place in Delhi and Karnataka. The IT Department further said the timing of the search was decided well in advance.

"The events involving certain MLAs of another state being brought to Karnataka were unforeseen and unpredictable events," it said.

"The search under Section 132 of the Income Tax Act is an evidence gathering exercise which is being carried in compliance with all statutory requirements. The search is the
continuation of an investigation which has been in progress for a considerable period of time," the IT department said.

The Congress legislators have been camping at the resort since Saturday last after the party flew them in here to fend off alleged "poaching" attempts by the BJP ahead of the August 8 Rajya Sabha polls in Gujarat.

Six of the 57 Congress MLAs in Gujarat have resigned from the party in the last few days with three joining the BJP on Friday.

The party has apprehensions over Patel's election prospects if more MLAs defect. The MLAs are attending classes on a host of topics including "the party's achievements in the last 60 years" and "the BJP's lies" among others, since Tuesday.

The move to hold the classes came at a time when a few MLAs from flood-hit constituencies of Gujarat had reportedly expressed their intention to go back, worried about the public opinion going against them.

Earlier, the itinerary during their stay here included visit to some tourist destinations and religious places, which drew criticism as MLAs were accused of "abandoning" voters
when their constituencies were facing nature's fury.