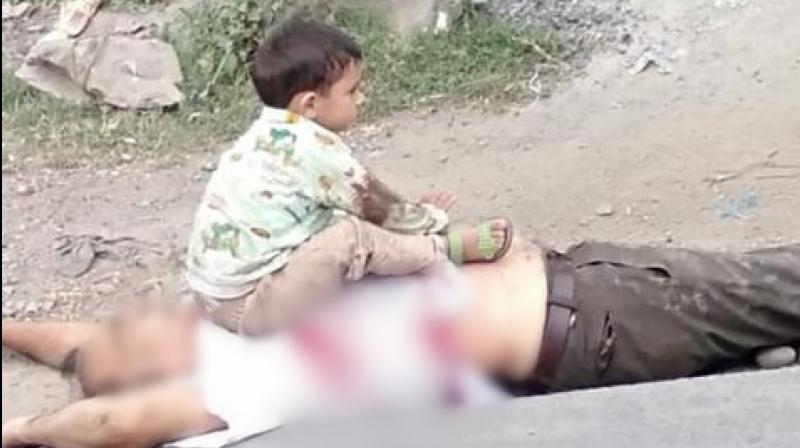 (GRAPHIC CONTENT) Three-year-old Ayaad sits on the body of his grandfather Bashir Ahmed Khan (65) after he died during a gunfight between security forces and militants in Sopore in Kashmir on Wednesday. The security authorities said the man was hit by a bullet fired by a militant but the man's family said he was shot in cold blood by the security forces.

Srinagar: The death of a 65-year-old bystander in the presence of his three-year-old grandson during a gunfight between security forces and militants cast a pall of gloom over the Kashmir Valley on Wednesday.

A CRPF jawan too was killed in the gunfight and two others were injured in an attack carried out by separatist militants in Sopore town, 48 km northwest of Srinagar.

The J&K police said two Lashkar-e-Tayyaba militants – whom they named Osman and Nasir – carried out the attack on a joint patrol of the CRPF and the J&K police. “Credible inputs indicate that two LeT militants, Osman, a foreigner, and Nasir were involved in the attack, a police spokesman said in a statement in Srinagar.

Images of the incident showed the civilian, identified as 65-year-old Bashir Ahmed Khan, lying dead on the ground with a bullet wound. His three-year-old grandson Ayaad sits on the man's bullet-riddled corpse, and then walks over crying to a security trooper.

While the Central Reserve Police Force (CRPF) and Jammu & Kashmir police said Bashir Ahmed Khan was hit by bullets fired by militants hiding in the attic of a mosque, the slain man’s family had a different story.

Bashir Ahmed Khan’s son said his father was killed in cold blood by the security forces. “The shootout sent pedestrians and motorists running for cover. My father couldn’t take cover because my nephew was sitting in the passenger’s seat in the front. The CRPF guys dragged him out of his car and shot him dead in cold blood,” he alleged.

His sister while calling for ‘blood for blood’ to avenge her father’s ‘cold blooded murder’, said, “My father has been killed and those who killed him should be killed as well”.

“Didn’t they see a little kid with my father?”

The family sources said Bashir Ahmed Khan, a contractor, was on his way to a neighbourhood in Sopore to oversee construction work there. He took his grandson along for distraction.

Questioning the veracity of the family's allegations, a senior police officer said, “What they have said is totally false. How can they say that the man was shot by security forces? They were not witnesses to the incident.”

Inspector-general of police Vijay Kumar said, “The video message circulated on social media by the son and daughter of the slain man is totally baseless. They have levelled allegations under threat by militants.”

He added, “I want to ask them whether they were present at the site of the incident. Did they see themselves who fired? They circulated video messages blaming the forces. That is totally baseless.”

IGP Vijay Kumar invited eyewitnesses to come forward and record their statements with the police. He insisted that there was no retaliation at all from the security forces and, therefore, the charge that the civilian was killed in reprisal was “totally false”.

Sopore’s senior superintendent of police Javaid Iqbal said Bashir Ahmed Khan was hit while trying to shield his grandson from gunfire. “As the indiscriminate firing by militants caused a commotion, Khan’s car, like many other vehicles, got stuck in the midst of the attack. Motorists left their vehicles behind and ran for cover. Unfortunately, one of the civilians was hit by a bullet and died,” he said.

The CRPF said its men had just arrived in Sopore’s Model Town for patrolling duty when militants hiding in the attic of a mosque sprayed gunfire upon them, resulting in injuries to four troopers.

One of them, head constable Dipchand Verma, died soon thereafter whereas the others Bhoya Rajesh, Deepak Patil and Nilesh Chawde were shifted to a military hospital in Srinagar for specialized treatment, a CRPF spokesman said.

He added, “One civilian died on the spot in the militant act”.

IGP Vijay Kumar told a local news agency that it was the police who rescued the slain man's grandson. Asked who took the pictures of the boy sitting on the lifeless body of his grandfather and then being “rescued” by policemen, he said, “Going to an operations area with mobiles is wrong. I will ensure that police teams going for operations don't carry mobiles with them as that may pose a threat to their lives. In 2018, many security forces personnel were killed while using their mobiles during duty hours and in standoff attacks.”