DCP (Central) Mandeep Singh Randhawa took to Twitter and urged people to help them in restoring normalcy in the area. 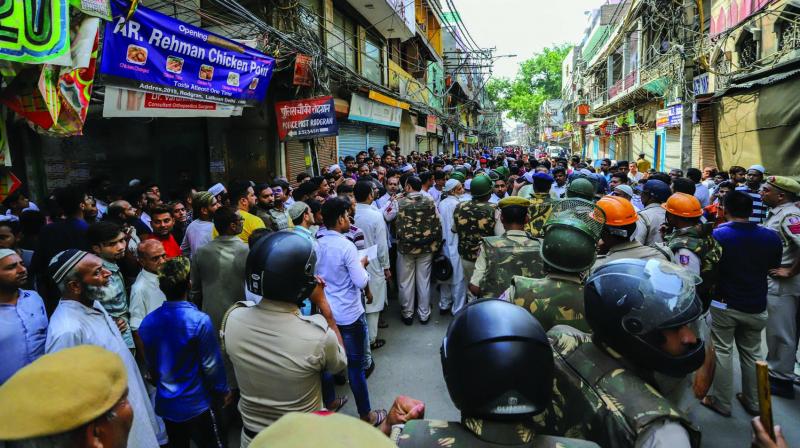 New Delhi: Tension and fear gripped Hauz Qazi area over a minor ruckus related to the parking of a bike that took a communal turn following which a temple was vandalised on late Sunday night. Fear continued to abound the locality on Monday as members of both the communities gathered and raised their respective religious slogans.

The Delhi police has beefed up security in the area to counter any nuisance by miscreants and is appealing to the public to remain calm and maintain peace and communal harmony. The police also urged them to stay away from rumours. Senior police officials from the neighbouring districts were present at the spot to control the situation.

DCP (Central) Mandeep Singh Randhawa took to Twitter and urged people to help them in restoring normalcy in the area.

A video has surfaced on social media which purportedly showed a man allegedly being thrashed by some people, who were suspected to be drunk, over a parking row. The minor altercation turned ugly when members of both the communities started clashing one another, police said.

“Last night at around 10.00 pm, a man came there and parked his two-wheeler next to Sanjeev’s stall. He objected and asked him to park the vehicle at a distance. Subsequently, the man went away from there and returned with some of his people and started beating him,” said the wife of Sanjeev Gupta, who runs an eatery stall.

However, some of the other residents of Lal Kuan had a different story that Mr Gupta, along with some of his people, thrashed the person who had parked his two-wheeler outside his stall.