The opposition MLAs did not paid heed to the Speaker's request to let the House carry out it's normal business of Question Hour. 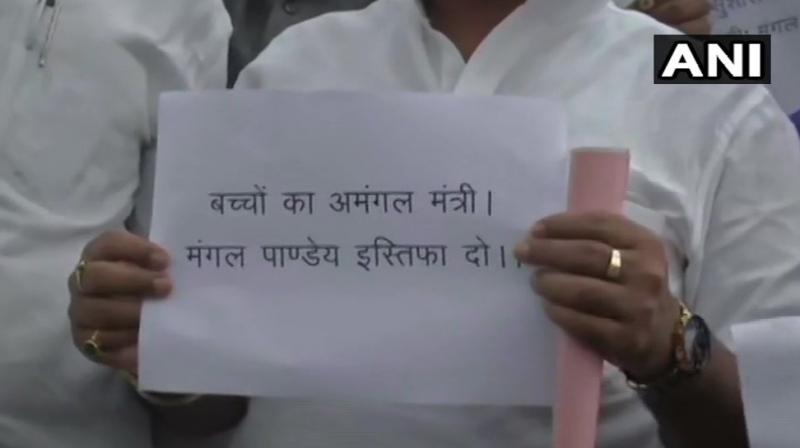 The opposition MLAs did not paid heed to the Speaker's request to let the House carry out it's normal business of Question Hour.

Patna: Bihar Assembly was adjourned on Tuesday as the opposition parties shouted slogans demanding the resignation of Health Minister Mangal Pandey over the deaths of more than 150 children due to acute encephalitis
syndrome (AES) in the state.

As the House assembled at 11 am for its business, RJD leader Lalit Yadav demanded the resignation of the Health minister holding him responsible for children deaths in Muzaffarpur and other parts of the state due to AES.

Speaker Vijay Kumar Choudhary asked the opposition leaders that the House had a debate on the serious issue on Monday, followed by the state government's reply on the issue.

Choudhary said that he had allowed the adjournment motion on the important issue of children's deaths from AES but it seemed that you (opposition MLAs) are adamant on the resignation of the minister by disrupting the House
proceedings.

The opposition MLAs did not paid heed to the Speaker's request to let the House carry out it's normal business of Question Hour and rushed to the well of the House raising slogans against Health minister Mangal Pandey and demanding
his resignation.

Parliamentary Affairs minister Shravan Kumar also said that the state government gave the reply after the debate on Monday.

Health minister and Chief minister also spoke during government's reply on Monday and now they (opposition) just want disrupt the proceedings of the House and don't want to let the members raise the issues of public importance.

They should go to their chair and raise the issue in the zero hour, Kumar said but commotion continued in the House for 15 minutes after which the Speaker adjourned the House till 2 PM (post lunch session).