Investigators have come across 11 pipes from wall of house, all placed close together, having no water outlet. 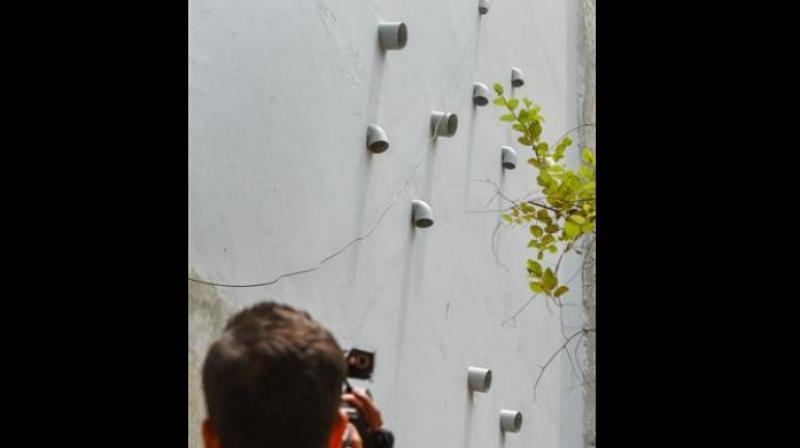 A photographer takes a picture of the 11 pipes protruding out of the house where 11 members of the same allegedly committed suicide, at Burari, in New Delhi. (Photo: PTI)

New Delhi: Chilling and strange details have come up during the investigation into the death of 11 of a family in north Delhi's Burari. In a major revelation, investigators have come across 11 pipes protruding from one wall of the house, all placed close together, however, having no water outlet.

The pipes face an empty plot and are apparently not outlets for water. Four of the pipes points straight while four are bent. One pipe is a little away from the others.

According to a report on First Post, Kishan Kumar, a local from Burari, explains the theory linking the 11 pipes. He said the pipes are connected to the washrooms adding that he has often noticed the family scribbling religious messages like dohas and shlokas (religious scriptures) on a blackboard outside their shop.

The Bhatias had a grocery store and lived in an apartment on the first floor.

Out of the 11 members, only one, 77-year-old Narayan Devi, was found on the floor, with the signs of hanging while the 10 others were found hanging from a net attached to the ceiling.

Read: 11 of family found dead in Delhi; 10 hanging blindfolded, one on ground

Pratibha's daughter, Priyanka (33), who got engaged last month too was found hanging like the others. Priyanka was supposed to get married by the end of this year.

Most of the bodies were found blindfolded, the mouths taped and hands tied behind their back.

Handwritten notes recovered by the police from the house have indicated towards observance of some definite spiritual or mystical practices by the whole family. According to the police, two registers were found with handwritten notes on how to attain salvation.

A relative of the family on Monday refuted claims they observed spiritual or mystical practices and may have died during the course of a “religious ritual that went wrong”.

“Someone killed them and all the reports on the spiritual angle are bogus. This family was a happy and peace-loving one who never believed in ‘babas’,” Sujata, a relative of the family, said.

The post-mortem report of six of the 11 members of a family who were found dead at their residence in Delhi revealed that the cause of their death was ligature hanging.

Read: Six of 11 members of Delhi family died due to hanging: Post-mortem report

Police have registered a murder case because there were “ligature” marks around the neck of Narayan Devi, prompting investigators to suspect that she was strangled. They said they were probing multiple theories to figure what led to the deaths.

Investigators so far have recovered handwritten notes from inside the house that they say hint towards a “suicide pact” related to occult practice.