India   All India  02 Jul 2017  UP: Woman cop who opposed BJP workers transferred 'to lift morale of party'
India, All India

UP: Woman cop who opposed BJP workers transferred 'to lift morale of party'

According to a report, one among the BJP workers was fined and arrested for not carrying driving documents. 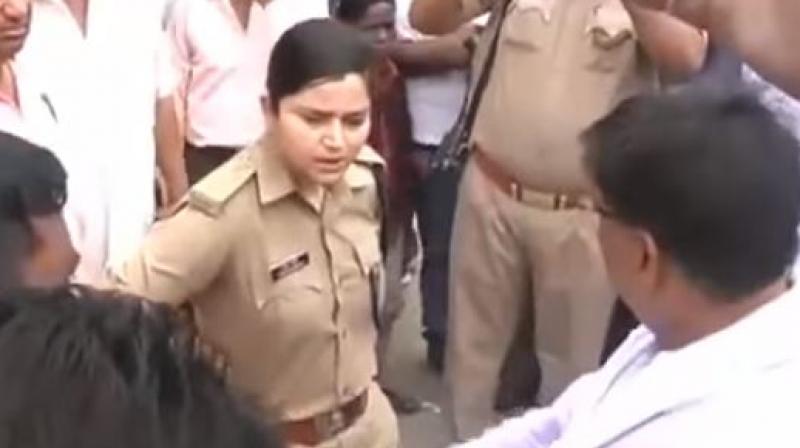 In a video footage of the incident that has gone viral, Thakur, a Circle Officer (CO), was seen confronting agitated BJP workers who are raising slogans against the police. (Photo: Youtube | Screengrab)

Lucknow: The senior police officer Shreshtha Thakur who stood up against a group of Bharatiya Janata Party (BJP) workers in western Uttar Pradesh's Bulandshahr, on Friday afternoon, was among 234 officers who were transferred by the Yogi Adityanath government.

According to a NDTV report, one among the BJP workers was fined and arrested for not carrying driving documents, which agitated the party workers.

Later, five others were arrested and sent to jail for disrupting law and order and creating obstacles for officers carrying out their duties.

It was said that the police officer was transferred after the local BJP leaders insisted on moving her out, arguing that such an action was necessary to lift the morale of the party workers.

"We had complained to the high command about this. We told our senior leaders that the officer does not know how to deal with the public," said Himanshu Mittal, the city president of the BJP in Bulandshahr.

"I think the differences between the officer and the public were beyond any compromise and so it is good for everyone that she has been transferred, including the officer," he added.

The incident happened on Friday afternoon when a BJP district-level worker Pramod Lodhi was issued challan for not carrying proper documentation of his motorcycle. He was arrested after he allegedly misbehaved with the officers.

In a video footage of the incident that has gone viral, Thakur, a Circle Officer (CO), was seen confronting agitated BJP workers who are raising slogans against the police.

"You please go and get written orders from the Chief Minister that your vehicles can't be checked by police," the officer was heard saying in the video footage.

She had also said that they were bringing bad name to BJP, and that the people would soon start calling them as 'goondas' of the party.

Earlier, a woman IPS officer was shouted at and threatened by senior BJP leader and Gorakhpur lawmaker Radha Mohan Das Agarwal while trying  to control a group of women who were demanding liquor ban.