Kumar said she was honoured by the trust the 17 parties led by the Congress have show in her. 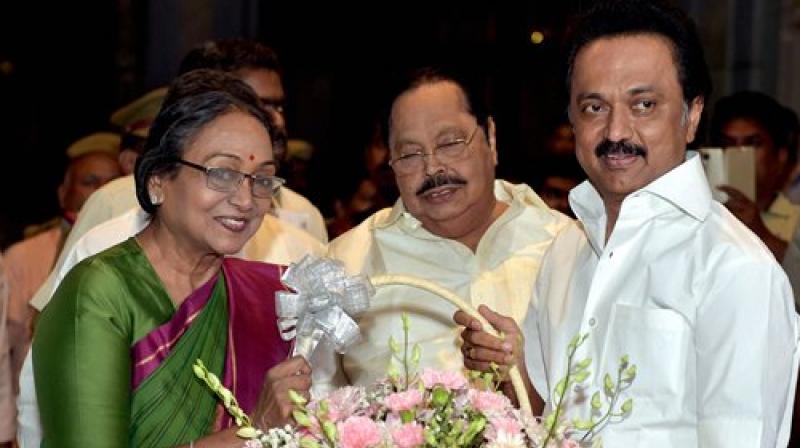 Chennai: Opposition's Presidential nominee Meira Kumar on Saturday appealed to all the MLAs and MPs from Tamil Nadu to listen to their "inner voice" when they cast their votes in the presidential poll.

She urged them to support her in "this ideological battle".

"I am fighting an ideological battle," she told reporters after a meeting in Chennai with MPs and MLAs of Dravida Munnetra Kazhagam (DMK), Congress, Indian Union Muslim League (IUML) and the Left parties.

She said, the collegium members should only listen to their inner voice and conscience and act. "This is my request to everyone."

The DMK also has four Rajya Sabha MPs and CPI and CPI(M) have one RS MP each from Tamil Nadu. She alleged that principles like transparency and the fight to end the caste system are "under threat" in the Modi regime.

"I am sorry to say that all the 17 Opposition parties (who have supported her) feel that these principles are now in danger, under serious threat."

Kumar said she was honoured by the trust the 17 parties led by the Congress have show in her. "This Opposition unity is inspired by the value system which we all hold so dear." She said she dedicated her life for the cause of the downtrodden and suppressed people.

“This is my agenda. Wherever I go and whatever position I hold, this will always be my agenda," she asserted.

She praised Tamil Nadu as a state which fought for ideals like social justice and hailed DMK chief M Karunanidhi as a force in upholding such great values.

"That is the binding factor that we have between the DMK nd the Congress."

Hitting out at the BJP-led Centre, Kumar said her party as inspired by Gandhiji's thoughts to ensure the dignity of the Dalits, the tribals, and the poor.

"My battle is to ensure their right and dignity... I am also fighting for all of you because we are pained to see that lately the voice which used to come out so strongly in the press is not coming out," she said.

She is scheduled to visit Puducherry on Sunday Senior Congress leaders Bansal, Mukul Wasnik also participated in the meet.