At least 14 big and small trenches occurred naturally within four hours in the Palasola-Dingeswar area. 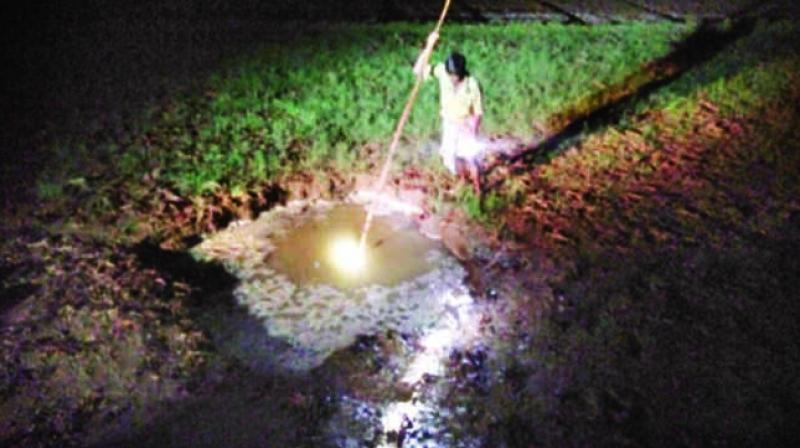 A villager tries to measure the depth of a pit by putting a bamboo into it.

Bhubaneswar: Sudden formation of several well-like pits has created panic among residents of Palasola village in Odisha’s Jagatsinghpur district, even as mystery shrouds over killing of sheep in Niali of Cuttack district.

As many as 14 big and small trenches occurred on Friday naturally within four hours in the Palasola-Dingeswar area while it was raining incessantly, reports said on Saturday.

The villagers say as they are unable to decipher whether the trenches were created due to landslide or geographical changes. According to reports, a deep trench was created suddenly near Palasola-Dingeswar road around 5pm during heavy rain.

“When we tried to measure the depth by putting a long bamboo stick, it got completely submerged. This indicates the depth could be more than 20 metres,” said the villagers.

The holes are said to be 10-15 ft wide. The scientific reason behind formation of such holes and trenches is yet to be ascertained.

Meanwhile, at Niali, where nearly 200 sheep have been killed by a mystery wild animal, more forest officials were deployed on Saturday and traps were laid out to catch the animals. Forest minister Bijayshree Routray said the mystery animal was suspected to be a wolf.