ICMR director general Dr Balram Bhargaw, warned states and UTs from rushing to open up restrictions saying unlocking has to be gradual 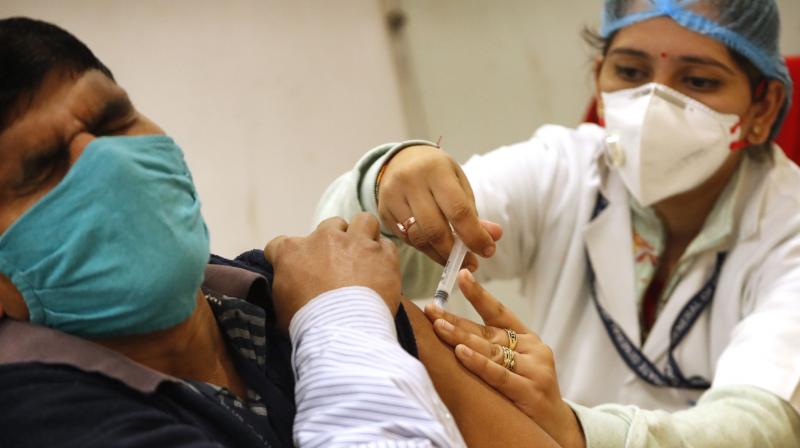 He said by mid-July and August more than one crore persons can be vaccinated per day. — Representational image/PTI

New Delhi: The count of daily Covid-19 cases came down to nearly 1.28 lakh and fatalities to 2,795 on Tuesday while over 2.55 lakh people recovered from the virus in a single day, taking the country's recovery rate to over 92 per cent. The daily positivity rate dipped to 6.62 per cent and it has been less than 10 per cent for eight consecutive days. The Centre has said that the “ferocious” second wave is abating now as more than half of the country’s total districts have less than five per cent positivity at present.

He, however, warned states and Union Territories from rushing to open up restrictions saying unlocking has to be gradual and very slow so that the advantage of the receding wave is not lost. “We have managed to suppress the virus for some time. Hence, we have to be very cautious. The opening up can be done in areas where the test positivity rate is less than 5 per cent and more than 70 per cent of the population in the vulnerable group of 60-plus and 45-plus with co-morbidities is vaccinated. The community ownership should be taken up in a big way to contain the emergence of another wave,” Dr Bhargawa added.

The Centre has said that the vaccination drive is being ramped up in a big way and by December the government plans to vaccinate the entire country. He said by mid-July and August more than one crore persons can be vaccinated per day. Dr Bhargawa clarified that there is no shortage of vaccines at present “but if you want to vaccinate the entire population in one month then that cannot be done.”

The Centre has clarified that there is no plan to allow mixing of doses with two different vaccines nor is there any plan to allow a single dose regime for any vaccine. “There is no such plan of mixing vaccines or allowing single doses only. Everyone has to take two doses of the same vaccine as per schedule,” said Dr V.K. Paul, member-health NitiAayog.

He said the government is now ramping up its facilities to deal with a possible third wave that may impact children. In this regard he mentioned some children with a history of Covid infection are landing up in hospitals nearly two-four weeks later with either pneumonia or multi system inflammatory syndrome (MSIS). However, the number of such children is not very high at present and the government is keeping a watch on this. A sero survey will soon be conducted to monitor the spread of Covid-19 this month with 28,000 blood samples, out of which half samples will be of children over the age of six.

Meanwhile, the World Health Organisation has termed the B.1.617.1 and B.1.617.2 variants of Covid-19 first identified in India, as 'Kappa' and 'Delta' respectively to also help remove association of countries with the virus.

This comes after India raised an objection to terming  B.1.617 variant as the "Indian variant". The WHO has also said that virus variants should not be identified with countries they are detected in. “The labels do not replace existing scientific names, which convey important scientific information and will continue to be used in research. No country should be stigmatised for detecting and reporting Covid variants,” Dr Maria Van Kerkhove, technical lead on Covid-19 at WHO, said.