India   All India  02 Jun 2019  Fail, pass, fail again! T’gana Board flip-flop over marks of girl who killed self
India, All India

Fail, pass, fail again! T’gana Board flip-flop over marks of girl who killed self

In a press statement released by the TSBIE, the Board said it was not responsible for the student's death. 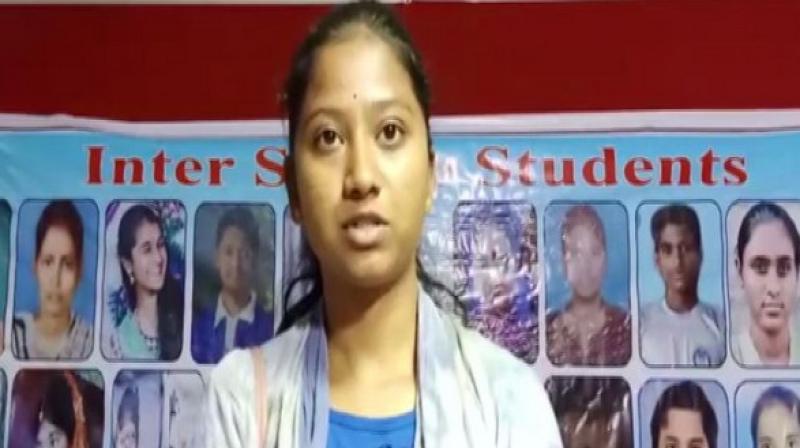 Hyderabad: A month after Anamika Arutala from the city who committed suicide after failing in the Intermediate examinations, a re-evaluation of her answer sheet by the Telangana State Board of Intermediate Education (TSBIE) declared her passed. Even as the student's family blamed it for her death the Board put out a fresh update claiming the updated passing marks were a "clerical error".

The family of the deceased student said they, along with the families of those students who like Anamika committed suicide after the results of the Board exams were declared, will hold a protest against the state government on Sunday.

Anamika's sister Udaya Arutala told reporters here: "On April 18 the results were released in which she got low marks in Telugu, after which she committed suicide. We filed a re-verification and today the marks were updated and she was declared passed. Everyone can see whose fault it is. There was no other reason behind her death. It is all the board of Intermediate's mistake."

TSBIE, however, denied the veracity of the updated result and claimed that Anamika had got only one extra mark- much below the passing level, after re-verification of her exam sheet.

Anamika was given 20 marks in the Telugu paper when the results were first announced but was awarded 48 marks upon re-evaluation. According to the latest update by the Board, the student has got only 21 marks in the subject.

In a press statement released by the TSBIE, the Board said it was not responsible for the student's death.

"Family is alleging TSBIE responsible for Anamika's suicide. We deny this allegation and will provide proof of answer scripts in which marks have changed from 20 to 21 after re-verification. The subject experts of Telugu subject have re-verified answer scripts of Anamika in the board exam. After completion of re-verification, she secured 21 marks. But her marks were wrongly uploaded as 48 instead of 21 because of clerical mistake in the spot valuation camp."

The TSBIE has also constituted a committee to inquire the issue and the error committed in uploading the marks.

"The Board will initiate action against those responsible for this error", the board said.

After Intermediate Board results were released on April 18, thousands of students were declared failed and reportedly around 26 students committed suicide for failing.

Later after a High Court order, the TSBIE conducted a re-verification of exam sheets of all the students who failed and found that 1137 students had passed and their initial results were uploaded wrongly.

Telangana Congress Working President and MP Revanth Reddy also hit out at the Board and tweeted, "Inter board mistake costed Anamika her life. Reverification proved she didn't fail. Globarina & Inter Board should be held responsible for her death and Sections 302, 304A & 306 should be booked."

#systemfailedAnamika Inter board mistake costed Anamika her life. Reverification proved she didn’t fail. Globarina & Inter Board should be held responsible for her death and Sections 302, 304A & 306 should be booked. @TelanganaDGP @TelanganaCMO https://t.co/euhwYIVJYj pic.twitter.com/AVUCA8W0ee