India   All India  02 Jun 2018  Does HDK plan to reverse soured ties with Murthy?
India, All India

Does HDK plan to reverse soured ties with Murthy? 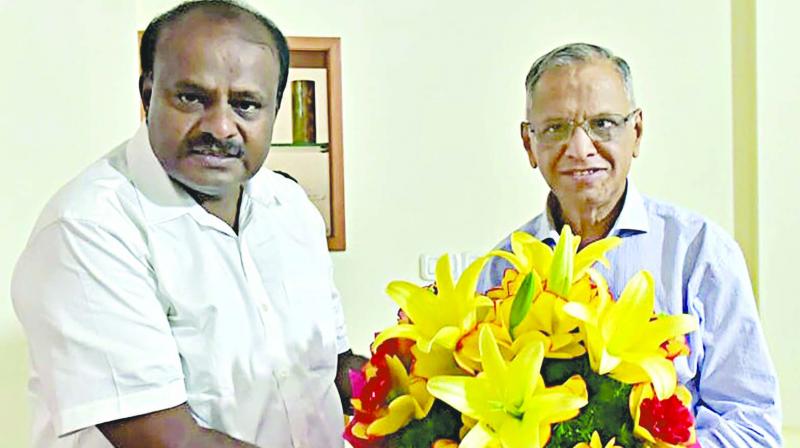 Bengaluru: Has chief minister H.D. Kumaraswamy decided to reverse a soured relationship with IT czar N.R. Narayana Murthy with an invite to be a part of the core advisory team for the development of infrastructure in Bengaluru?

Ironically, it was during a Congress-JD (S) coalition (2004-2006) that relations took a turn for the worse resulting in chief mentor of Infosys, Mr Narayana Murthy’s exit from the post of Chairman of Bengaluru International Airport Ltd. Reason: JD (S) patriarch H.D. Deve Gowda taunted Mr Murthy on several occasions over the delay in completion of the airport and for his vision for urban reforms in the state. Anguished by constant barbs of Mr Gowda, Mr Murthy sent his resignation to late chief minister N. Dharam Singh, and did not heed to requests to withdraw his resignation letter.

Interestingly on Friday, Mr Kumaraswamy called on Mr Murthy and sought his guidance in managing the city and its infrastructure. He said, he wanted Mr Murthy to be part of a team headed by himself to address a plethora of issues including development of infrastructure and disposal of garbage. In response, Mr Murthy said it would be a pleasure to be part of such a team and he would give his suggestions in two months.

Meanwhile, urban affa-irs expert Ashwin Mah-esh said the CM or the state government could constitute an advisory body. This entity, however, should not become a substitute to statutory body like Metropolitan Planning Committee.