Trade-off on OBOR is a risky affair for India

Beyond the optics of muscle-flexing by both the Chinese and the US-led flotillas in the routine show-of-strength at the Chinese high seas. 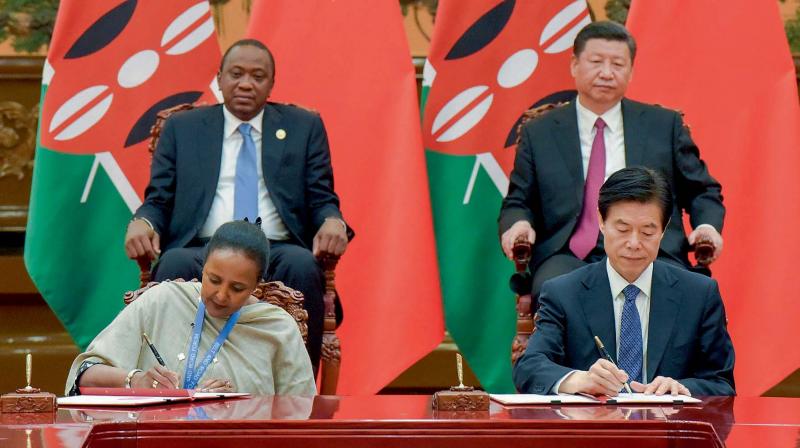 Kenyan President Uhuru Kenyatta, top left, and Chinese President Xi Jinping, top right, attend a signing ceremony following their bilateral meeting held on the sidelines of the Belt and Road Forum for International Cooperation at the Great Hall of the People in Beijing on May 15, 2017. (Photo: AP)

Overtly military alliances like the Nato are relics of the past and are giving way to more holistic alliances that mesh imperatives of economics, diplomacy and infrastructural connectivity. These new-age geostrategic initiatives like the Chinese-led, “One Belt, One Road” (OBOR) promise a denser and more compelling equation amongst partnering countries, then, the unidimensional groupings of the past, like “Organisation of Islamic Countries” (OIC that is religion-based) or “South Asian Association for Regional Cooperation” (Saarc that is region-based), as unidimensional alliances are prone to bilateral intrigues amongst member states. The neologism of the “Chinese Century” based on the bubbling hegemonistic instincts within China, necessitates an uninterrupted and safe, “two-way access” to the Chinese footprint across the globe.

OBOR is the Chinese master-plan that optimises the multi-dimensional algorithm of economic diplomacy, energy sustainability and military reach through a series of multiplatform connectivity from the Chinese mainland to Eurasia and Africa. A sub-component of the overarching OBOR tentacles is the limited mandate of “China-Pakistan Economic Corridor” (CPEC) that geographically cuts through Pakistan-occupied-Kashmir, and therefore posits an issue of territorial integrity for India. So, following India’s snub to the two-day “Belt and Road” meet, the ostensibly naïve suggestion by Pakistani Prime Minister Nawaz Sharif to “not politicise” OBOR or “that it has no geographical boundaries” was both convenient and expected. Such alliances and groupings are as much about long-term geostrategic changes, as they are about short-term posturing and positions. Thus, even part-accepting the OBOR initiative would have willy-nilly tantamount to sanctifying an unacceptable territorial compromise to the detriment of India.

Genealogically, OBOR is borne of the Chinese fears of “seaway susceptibilities”, with a battery of anti-Chinese sentiment prevailing in the Pacific and Indian Ocean Rim — from Japan, Taiwan to the Asean countries under the belly of the mainland, a wary neighbourhood looms large for Beijing that views the Dragon’s aspirations and the accompanying overreach with concern and coldness. The ongoing belligerence playing out in the South China Seas is symbolic of the prevailing undercurrents and potential disturbances that could impede the Chinese race towards superpower-dom. To fructify its hegemonistic visions, China needs to keep the lifeline seaways to-and-fro, from the mainland, free from any “choke” scenario — this in today’s hostile environment warrants alternative options (read, OBOR) that could potentially enjoin a relatively more friendly and parched set of nations towards the West of the Chinese mainland.

Beyond the optics of muscle-flexing by both the Chinese and the US-led flotillas in the routine show-of-strength at the Chinese high seas, there is no immediate danger for the life-sustaining Chinese traffic in the South China Seas that ensures the requisite energy and raw material supply, as indeed, the reverse peddling of Chinese manufactured wares. OBOR theoretically, reduces the dependence on the diplomatically choppy sea-routes and opens new markets and dynamics for the overheating Chinese juggernaut. The financial bill for this gargantuan Chinese initiative is a cool trillion dollars, which hopes to generate payback economically, geostrategically and militarily — through the inevitable “vassal states” who get ensnared by the lure of infrastructural transformation. But such initiatives are easier to sketch on drawing boards than on ground, as these initiatives connect the dots more seductively, then practically. Realistically, the Chinese will remain dependent and vulnerable to ferry their wares through the seaways, and herein lies the doomsday prospect of a debilitating blockade to the Chinese engine that remains dependent on import and export. China supposedly carries only three weeks of energy reserves and any temporary blockade of seaways could be catastrophic.

The single-most vulnerable point in the Chinese seaways, ironically, sits under the eagle gaze of the undisputed Indian territory and waters of the South Nicobar Islands, at the very mouth of the ultra-narrow Malacca Straits (1.5 nautical miles wide), that is economically an unavoidable Chinese sea passage. It is this haunting nightmare of a chokepoint that manifests in the “Malacca dilemma” that could get addressed theoretically, by China securing an alternate energy and trade routes via OBOR (it additionally cuts more than 6,000 miles of distance, along with collateral economic, diplomatic and military benefits in the region).

Now, this piquant geographical reality affords a legitimate “pivot” to India to posture a certain counterpoise that is more immediate — OBOR is more long-term and it ambitiously entails over 900 independent projects in over 60 countries, bestowing a certain incertitude to the entire proposition, given the dynamics and the expected counter-moves to scuttle OBOR by countries like India, the US, Japan, etc. The previous experience of such sweeping strategic concepts by the Chinese like the “String of Pearls”, is an foreboding example of how plans can go awry by the vicissitudes of time — the change in governments in Yangon, Colombo and Dhaka from 10 years ago to now, had led to decidedly more pro-India dispensations. (The junta in Myanmar made way for Aung San Suu Kyi’s NLD, in Sri Lanka Maithripala Sirisena replaced the pro-China Mahinda Rajapaksa and Sheikh Hasina had replaced Khaleeda Zia). These local changes led to a rethink in terms of the planned “Pearl Ports” in Sittwe, Chittagong and Hambantota, respectively, that could have strangulated India, much like OBOR does, theoretically.

Besides India, the US too would be watching the OBOR unravelling to articulate a suitable response to counter the import of OBOR — herein, the providential sovereign “pivot” of the Southern Nicobar geography is unmistakable and underexploited. Any dual economic-military initiative that strengthens the Indian footprint and by default enhances the Chinese vulnerability, would be fair game. A transshipment port facility at this “pivot” point could be self-sustaining given the traffic (100,000 vessels cross the narrow passage annually), and as the Pakistani PM stated, “CPEC is an economic undertaking open to all countries in the region,” would hold true for the Indian initiative at the “pivot” of Malacca, as an immediate counterpoise to OBOR.

Contrary to some belief, joining OBOR is not an option as the risks outweigh the rewards for India, as the implied assumptions militate at various levels, essentially sovereignty. There is a more effective alternative in a counterpoise that is truly tectonic in impact, economically transformational and of a binding interest to all the non-OBOR nations, who could be enjoined in a more realistic way to develop the concept, within expedited timeframe, vis-à-vis the OBOR.