A domestic Assembly, Integration and Test facility will enable the Indian Army to access maintenance, spares and support for the M777 locally. 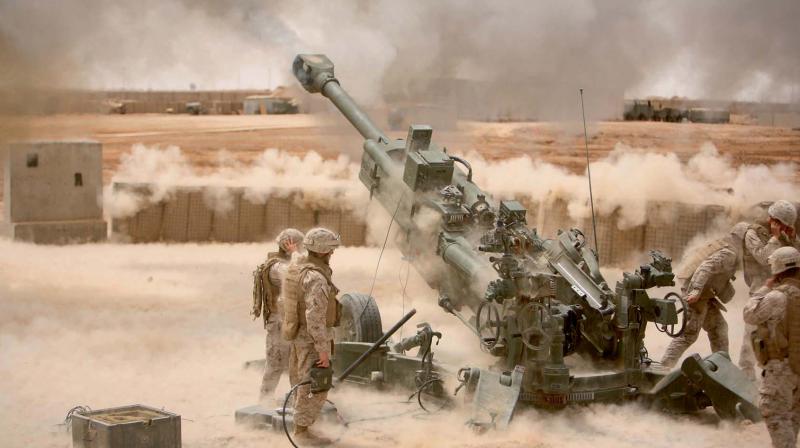 In 2015, BAE developed and submitted a US government-supported proposal offering a higher degree of indigenisation on the M777 weapon system.

For the first time in three decades, the Indian Army received two new artillery gun systems, the M777 A-2 Ultralight Howitzer (Indian) ULH, which arrived on May 18, 2017 for preparation of firing tables. During this event, the guns will fire 155 mm indigenous ammunition. The weapon system was contracted on November 30, 2016. As per the contract agreement firing tables are being prepared by the contracted agency, i.e. the US government and BAE GCS Ltd with the support of the Indian Army. After firing tables are ready, three more guns will be received in the second stage in September 2018 for training. Thereafter, induction will commence from March 2019 onwards at the rate of five guns per month till the complete consignment of 145 guns is received by mid-2021.

Proving its commitment to Prime Minister Narendra Modi’s call to “Make in India”, BAE Systems selected Mahindra as its business partner for the proposed in-India Assembly, Integration and Test (AIT) facility for the M777. And the government to government deal initiated during the tenure of former defence minister Manohar Parrikar resulted in the first two guns arriving within less than six months, much earlier than what was scheduled.

Interacting with this writer, Nik Khanna, managing director, India, BAE Systems, said, “The arrival of the first two weapon systems in India, ahead of schedule, is a milestone event for the M777 Ultra Lightweight Howitzer programme. We are proud that the M777 launches the Indian Army’s artillery modernisation programme and look forward to continuing our collaboration with the US and Indian governments, the Indian Army, Mahindra, and Indian industry.”

In all, 25 M777s will be imported directly from BAE Systems, the manufacturer of the guns, while the rest will be assembled in India in collaboration with Mahindra Defence Systems.

In 2015, BAE developed and submitted a US government-supported proposal offering a higher degree of indigenisation on the M777 weapon system. The highlight of this is the commitment to establish AIT capabilities in India in partnership with a domestic Indian company. The selection followed a detailed assessment of Mahindra’s ability to fulfil the requirements and provide the best value to the M777 India programme, and in the future, grow its capability as a strategic partner for BAE Systems in India.

S.P. Shukla, group president, Mahindra Defence & Aerospace, Mahindra Group said, “Mahindra and BAE Systems share the same values and common vision towards “Make in India”. BAE Systems is one of the largest defence companies globally and we could not have a better partner. M777 will give our defence forces a much-needed operational advantage and an access to state of the art technology. Mahindra M777 facility will also ensure that the life cycle support is available locally thereby enhancing operational availability of the guns. We look forward to making a major contribution to our defence forces and economy of India.”

Joe Senftle, vice-president and general manager, Weapon Systems, BAE Systems Inc. said, “As a founding partner of defence manufacturing in India, BAE Systems is pleased to partner with Mahindra on our offer to develop an Assembly, Integration and Test facility in India. The facility is a fundamental part of the M777 production line. A domestic Assembly, Integration and Test facility will enable the Indian Army to access maintenance, spares and support for the M777 locally. We will continue to support the two governments to progress to contract agreement so that we may begin the process of ‘Make in India’ for M777.”

With maximum unassisted and assisted ranges of   24.7 km and  30+ km respectively, rates of intense fire of five rounds per minute for up to two minutes and sustained fire of two rounds per minute, the M777 can fire all current and developmental US and Nato standard 155 mm projectiles and charges, including Modular Artillery Charge System, as well as advanced rounds such as BONUS and EXCALIBUR. The system’s maximum road speed of 88 kph/55 mph, cross country speed of 24 kph/15 mph, it being transportable by towing vehicles, fixed wing aircraft like C130, C141, C17 or C5, as well as the large helicopters, its rapid emplacement in three minutes,  displacement in two minutes, all provide it high degrees of lethality and tactical and strategic mobility.

Its ultra-low silhouette  makes its  thermal and radar signatures quite low. Its   portability by land, sea and air, makes the system’s logistical footprint low. This means that it can be frequently moved and redeployed, maximising survivability, without encountering the IED risks that self-propelled systems face. Also, the weapon can strike over extended distances, regardless of terrain and obstacles.

Its strengths have been proven in battle, particularly in Afghanistan since 2006. Over 40,000 rounds fired have proven its simple, dependable operation, even in harsh desert climates. Selected by the US Marine Corps and the US Army as their next generation medium force weapon, the M777 was fully developed through an intensive engineering and manufacturing development (EMD) programme in the US.

The last artillery guns that India bought were the controversial Swedish Bofors in the mid-1980s. But the $1.4 billion deal was mired in controversy after reports that the Swedish company had paid $9.9 million (Rs 64 crores) in kickbacks to top Indian politicians. It cost then Prime Minister Rajiv Gandhi a chance to return to power in the next election; it also slowed down defence procurement considerably. In the 1980s, India had received the blueprints of the Bofors gun but manufacture of the weapon system never began owing to the kickbacks scam.

While the Bofors were used very effectively during the Kargil war in 1999, in the period following it Indian Army’s artillery remained starved for guns and ammunition. During the 10 years of UPA’s rule there was no progress in the long overdue modernisation of the Indian Army and particularly the artillery. Some artillery weapon systems were tested and found fit by the artillery, but that was it. There was no forward movement towards replenishing/replacing artillery and air defence systems. Some old “gunners” even commented that there seemed to be “forces at work to ensure that we don’t get what we need, making us lose much of the edge we had during the 1971 India-Pak war.”

Since the BJP government assumed charge there have been efforts to fast-track the acquisition of modern artillery guns for the Indian Army, under a Rs 22,000 crore modernisation plan.

Designed by the Defence Research and Development Organisation (DRDO) and the Ordinance Factory Board (OFB), the Advanced Towed Artillery Gun System (ATAGS) showcased for the first time during this year’s Republic Day parade is a 155 mm, 52-calibre gun which is towed by a truck. Named Dhanush, with a range of 38 km, it has cleared trials with the Indian Army, which plans to acquire 414 with each gun reportedly costing Rs 14 crores.

Ironically, a modernised and significantly improved variant of the Bofors FHB02 gun is finally being built by OFB after the old designs were belatedly pulled out and dusted.