India   All India  02 May 2019  Massive evacuation ops underway in Odisha ahead of Cyclone Fani
India, All India

Massive evacuation ops underway in Odisha ahead of Cyclone Fani

According to the SRC, the evacuation of eight lakh people is the largest-ever evacuation operation in the country. 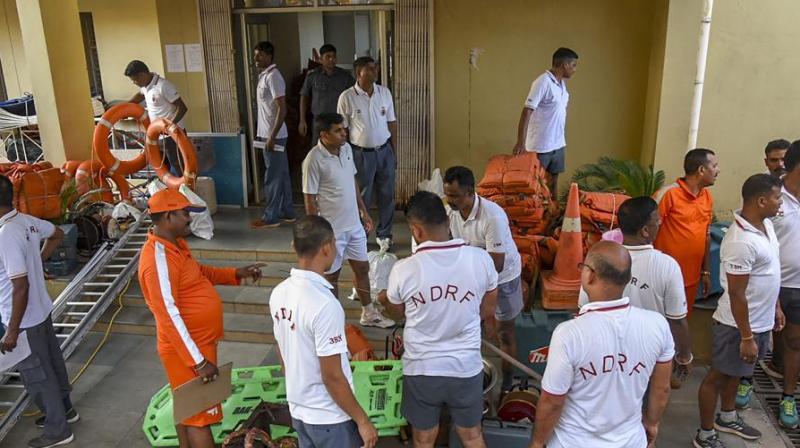 Arrangements have been made to start free kitchens to provide cooked food to the evacuees, the SRC said. (Photo: PTI)

It is likely to move north-northeastwards and cross the Odisha coast near Puri on May 3 evening with maximum sustained wind speed of 170-180 kmph and gusting up to 200 kmph, Special Relief Commissioner (SRC) B P Sethi said. The cyclone is being tracked by Doppler Weather Radars at Chennai, Vishakhapatnam and Machilipatnam, the SRC said.

People from low-lying and vulnerable areas of coastal districts are being shifted to safe places such as 880 cyclone centres, school and college buildings and other structures, he said.

According to the SRC, the evacuation of eight lakh people is the largest-ever evacuation operation in the country. At least 14 Odisha districts - Puri, Jagatsinghpur, Kendrapara, Balasore, Bhadrak, Ganjam, Khurda, Jajpur, Nayagarh, Cuttack, Gajapati, Mayurbhanj, Dhenkanal and Keonjhar - are likely to bear the brunt of the cyclone, which is also likely to impact Andhra Pradesh, Tamil Nadu and West Bengal.

Emphasising that every life is precious, Chief Minister Naveen Patnaik, who reviewed the preparedness on Wednesday evening, said there was a need to give special attention to pregnant women, children, elderly people and differently-abled persons.

Arrangements have been made to start free kitchens to provide cooked food to the evacuees, the SRC said. Over one lakh dry food packets have been kept ready for air dropping in the areas to be affected by Fani, the most severe cyclonic storm since the super cyclone of 1999 that claimed close to 10,000 lives and devastated large parts of the state.

Navy, Air Force, Army and Coast Guard have been put on high alert to meet any eventuality. Personnel of National Disaster Response Force (NDRF), Odisha Disaster Rapid Action Force (ODRAF) and fire service have been sent to vulnerable areas to assist the administration, an official said.

The evacuation exercise from low lying areas will be completed by Thursday evening keeping in mind the forecast of massive tides that could surge up to 1.5 metres during the landfall, the SRC said.

The 880 cyclone shelters in coastal and southern districts have been kept ready to accommodate evacuees, he said.

In Gajapati and Rayagada districts, where such facilities do not exist, the evacuated people will be housed in schools and anganwadi centres. The East Coast Railway (ECoR) has cancelled over 103 trains for the safety and security of passengers in view of the cyclone, an ECoR official said.

Three special trains will run from Puri to Howrah and Shalimar in West Bengal on Thursday for the evacuation of tourists and passengers, he said, adding train services between Bhadrak and Vizianagaram are cancelled for at least two days from Thursday evening.

The IMD has forecast rainfall at most places, heavy to very heavy rainfall at a few places and extremely heavy rain at isolated places in coastal Odisha and the interior districts of the state on May 3.

Several areas are likely to receive rainfall up to 20 cm under the impact of the cyclone, Director of the Meteorological Centre in Bhubaneswar, H R Biswas said. As sea condition will be rough and phenomenal over Northwest Bay of Bengal off Odisha and West Bengal till May 4, fishermen have been advised not to venture into sea in this period.

Tourists have been asked to leave Puri by Thursday evening, while Nandankanan Zoological Park in Bhubaneswar will remain closed from May 2 to 4.

All operations were stopped at Paradip Port and Cautionary Distant Warning Signal Number Three was hoisted in all ports in Odisha. The Third Stage warning is issued at least 24 hours in advance of adverse weather over coastal areas.