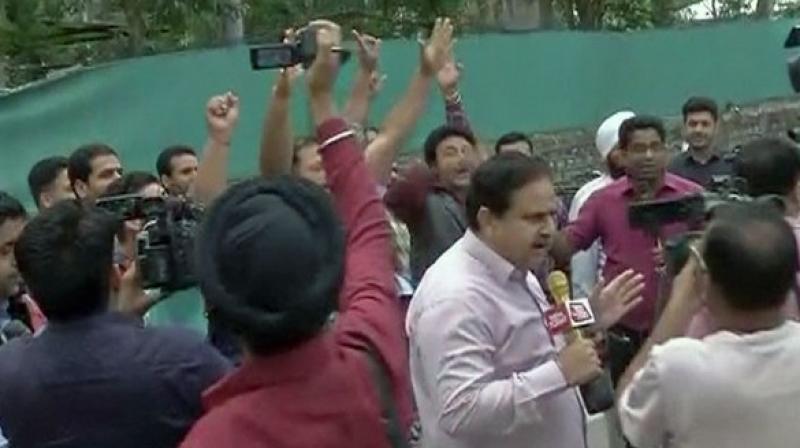 'Indian Army age badho hum tumhare saath hain, Bharat Mata Ki Jai', were some of the slogans raised by the locals. Ex-servicemen Sharma called on Prime Minister Modi to take stringent action against the Pakistan Government for such inhuman behavior with the Indian militants.

"We want our Prime Minister to take stern action against the Pakistan Government for mutilating the bodies of two Indian Militants in Krishna Ghati sector of Jammu and Kashmir's Poonch district," Sharma told ANI.

Pakistan's brutal Border Action Team (BAT) mutilated the bodies of two Indian soldiers on Monday in Krishna Ghati sector along the Line of Control, where they had beheaded Lance Naik Hemraj in 2013. The Indian Army confirmed the involvement of the BAT in the gruesome act.

"Pak Army carried out unprovoked rocket and mortar firing on two forward posts on the Line of Control in the Krishna Ghati sector. Simultaneously, a BAT action was launched on a patrol operating in between the two posts. In an unsoldierly act by the Pak Army, the bodies of two of our soldiers in the patrol were mutilated. Such despicable act of Pakistan Army will be appropriately responded," read the Indian Army's statement.

Yesterday, the Pakistani soldiers along with their Border Action Team (BAT), which include trained border inhabitants, launched a joint attack. They first fired rockets and followed this up with firing from automatic weapons, near Kranti Post located in Poonch's Krishna Ghati Sector around 8.30 a.m.

The Pakistanis then crossed the LoC, entered 200 meters into Indian Territory, and attacked a joint patrol of the Army and Border Security Force (BSF), heading towards a nearby post.

It is the same Krishna Ghati sector where the Pakistani BAT had beheaded Lance Naik Hemraj and badly severed the head of Lance Naik Sudhakar Singh of 13 Rajputana Rifles, on January 8, 2013. Army Chief General Bipin Rawat arrived in Srinagar yesterday and took stock of the security situation in Jammu and Kashmir.