While Punjab Chief Minister Amarinder Singh asked for 'free hand' for the army in dealing with terror, Congress slammed Modi for inaction. 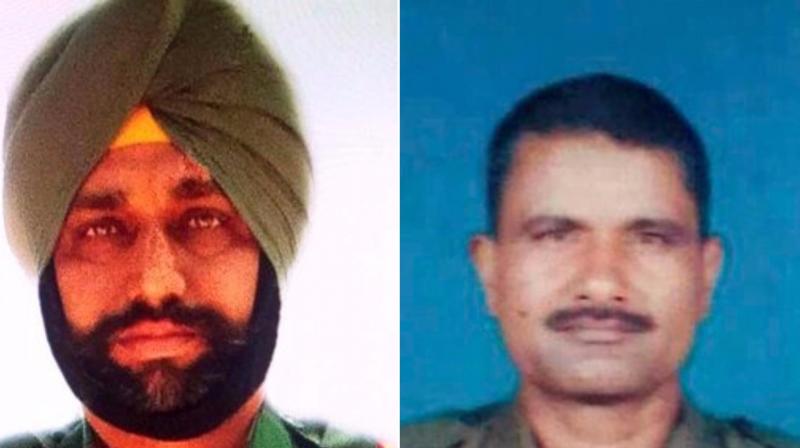 The Congress on Monday asked the government to "wake up from its slumber" after two soldiers were killed on the Line of Control (LoC) and their bodies mutilated by Pakistan, and urged the Prime Minister to take the Opposition into confidence while framing a policy to tackle such incidents.

Holding the government responsible for the "absence of policy or direction to tackle Pakistan or terrorism", the Congress took a dig at Prime Minister Narendra Modi asking when he will display "his 56-inch chest" to Pakistan.

Congress vice president Rahul Gandhi also strongly condemned the killings and described them as a "barbaric and disgraceful act".

"The government must move beyond platitudes and hold Pakistan to account," he tweeted.

Congress' senior spokesperson Anand Sharma said such cowardly acts are unacceptable in a civilised society and are not conducive to Pakistan's own interests and security.

Expressing concern over rise in terrorist incidents in the country post-September 2016 surgical strike, he attacked the BJP-led NDA government over its Kashmir policy saying "it has been a disaster marked by political opportunism".

AICC in-charge of communications Randeep Surjewala said 200 soldiers have been martyred in J&K since May, 2014 and asked what this government was doing and the incident displays "lack of a credible political leadership in the country and absence of a policy or direction" in this regard.

"It really shows a serious lapse in national security on part of the present BJP Government. When will BJP government wake up from its slumber. We have seen enough rhetoric and we have seen a lot of words. It is high time for a decisive policy and a decisive line to tackle terrorism, as also to tackle Pakistan," Surjewala said.

He also asked when India can have a credible and decisive policy to tackle Pakistan and to deal with terrorism and for how long will the nation have a "complete vacuum in our diplomacy as also the strategic policy of dealing with Pakistan in terrorism".

"Was 56-inch chest an empty 'Jumla'? Pakistan has been attacking India with impunity. When is Prime Minister Modi planning to show off his '56 inch chest' to them and send them cowering?" he asked.

Citing figures, Surjewala claimed in J&K alone in the last three years, 200 jawans made the supreme sacrifice and 91 civilians were killed, and Pakistan committed 1,343 ceasefire violations, besides 12 major terrorist attacks in Punjab and J&K.

Sharma called on Modi to break his silence and spell out a policy on Kashmir after taking the opposition into confidence on the issue and on internal security to stop rising terrorist incidents sponsored from across the border.

"It is the Prime Minister's duty that he takes the Opposition leadership into confidence.

The Prime Minister should hold a meeting with Opposition leaders and discuss the policy he has in mind to control what is happening in Kashmir and along the border.

"The situation is serious and we cannot overlook it and the Prime Minister should focus on governance and stop propaganda and claims," Sharma told reporters.

He said the government lacks comprehension of the situation as it has allowed things "to deteriorate and go completely out of control because of its sheer lust for power, political opportunism and formation of a government (in J&K)" which ignored the realities of internal security challenges in that region.

He said there have been six major attacks on army camps and 41 army officers and soldiers have been martyred in these attacks.

"Therefore, what is happening today, the situation has to be reversed. This situation cannot be allowed to drift any further," he said.

The Communist Party of India (Marxist) on Monday termed the mutilation of two Indian Army soldiers as intolerable and asked the Centre to act sternly against Pakistan.

"This is something which is not acceptable. These incidents can't be tolerated. The government has to answer this. How this can be achieved, the government, if wants, can discuss with us," CPI(M) general secretary Sitaram Yechury told ANI.

Rajya Sabha member Amar Singh on Monday urged Modi to take strong action against Pakistan in the wake of the mutilation of two Indian soldiers. "A strong reaction is needed from a prime minister who does not care about political fallout at the cost of national esteem," he told PTI.

The expelled Samajwadi Party leader was in Wagah on Monday as part of a parliamentary delegation vising Indo-Pak border posts.

He said despite attempts by former Prime Minister Atal Bihari Vajpayee and Modi to improve relations with Pakistan, Islamabad's attitude has not changed.

Punjab Chief Minister Amarinder Singh on Monday strongly condemned the barbaric attack, demanding a 'free hand' to the Army to tackle dangerous situations in the line of duty.

He said that our soldiers are being exposed to all kinds of risks and atrocities, not only at the hands of enemy forces from across the border but sometimes also at the hands of civilians, as happened recently in Kashmir.

Reacting strongly to Monday's incident in which bodies of two Indian soldiers were mutilated, he urged the central government to send out a strong signal to the inimical forces against indulging in such atrocities and barbaric acts.

He backed the Indian Army's warning of "appropriate response" for the "despicable act." Such unprovoked acts of excessive violence cannot be tolerated or allowed to go unpunished, he said, adding that the Indian soldiers were "not a dispensable commodity to be sacrificed at the altar of such uncivilised and savage assaults".

In a similar vein, he also came down heavily on those criticising the Indian Army's action of tying a man to a jeep to protect its soldiers from the vicious attack unleashed by civilians during the recent elections in Kashmir.

The civilians tried to take the law in their hands, he said, adding that it was the duty of the army officers to protect their jawans.

Coming out in defence of an army officer, in the line of fire from various quarters, including a section of the media, over his 'human shield' action, Amarinder said the officer was simply doing his duty.

The CM  said, "had I been in the same situation I would have carried out the same action."

In a message to his former comrades in army, he said, "Regardless of your rank on retiring don't forget your past and that you belong to one of the finest armies in this world."

"Initiative is part of our training and curtailing it is killing the very essence of regimental soldiering," he further said, adding, "I hope and trust that officer is suitably awarded for his decision and that all of us fully support his action."

Time has come to "smash the head" of Pakistan, the Vishwa Hindu Parishad (VHP) on Monday said as it announced a nation-wide protest by its youth wing Bajrang Dal against mutilation of two Indian soldiers in Kashmir.

Demanding stern action against the stone-pelters in Kashmir, Vishwa Hindu Parishad (VHP) spokesperson Vinod Bansal said "These stone-pelters and those who are backing them should be dealt with in the same way as those who attack the army."

Urging the government to give free hand to Indian soldiers after mutilation of its two jawans, he said that it’s high time when government should take a decisive action against Pakistan.

"Time has come to smash the head of Pakistan, otherwise such incidents will continue to happen," Bansal said.

He also informed that Bajrang Dal will hold demonstrations across the country tomorrow to protest against the mutilation of Indian soldiers and continued attacks against the security personnel in the Valley.