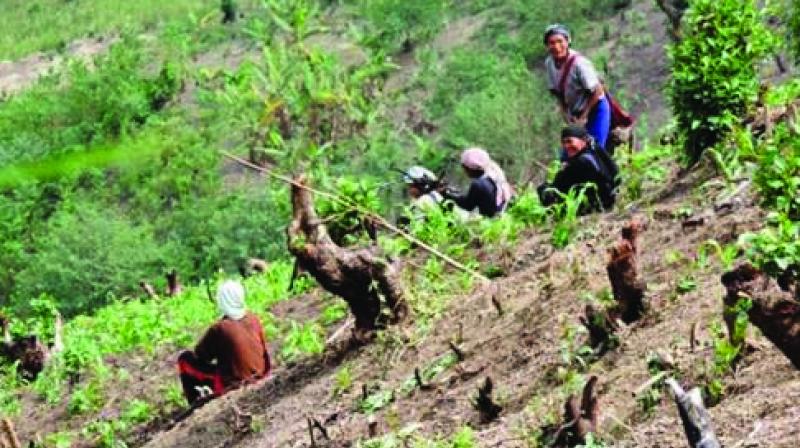 Shillong: Long known for its antioxidant, anti-inflammatory and anti-bacterial properties due to presence of very high curcumin content, the Lakadong turmeric has the potential to change life of farmers of Meghalaya but the situation in the frontier state is just the opposite as a majority of farmers want to turmeric-growing due to poor demand and market price.

As  Homran Lanio, a member of Lakadong village council, said, “We are no longer interested in turmeric farming as there is no buyer.”

He said,  “Now we are producing turmeric only for domestic use.”

It is significant that Lakadong turmeric is a much sought after because of its high curcumin content (5.5) and benefits in curing chronic intestinal problems and diarrhoea. It is a location specific variety grown in Meghalaya.

Village teacher Friday Rymbai said, “We can produce turmeric in very high quantity if there is a guarantee of buyers. The villagers have been selling their limited production in the local market which is exported locally to Bangladesh or nearby market.”

He regreted that people do come to see the Lakadong village for turmeric but the village doesn't have a grinding mill to process the cropc. "We need to travel long to grind our turmeric,” said Mr Rymbai.

Declining to sell their limited stock of turmeric uprooted from their farm, the villagers pointed out, “We have been hearing about many government schemes to promote turmeric farming. You can see for yourself that how much turmeric is produced at Lakadong.”

The Spices Board of India also claims to have been facilitating organic cultivation of turmeric in Meghalaya but the villagers are not aware of such a scheme.

There have been many initiatives of the government that claim to have promoted  farmers by facilitating quality seed but it is yet to reach the Lakadong, the village, which is known for its turmeric.

India is the largest producer, consumer and exporter of turmeric in the world. Indian turmeric is considered to be the best in the world market because of its high curcumin content.

The important turmeric growing states in India are Andhra Pradesh, Tamil Nadu, Orissa, Maharastra, Assam, Kerala, Karnataka and West Bengal. Experts admit that Lakadong Turmeric grown in Jaintia Hills is one of best in India but the production is low and sold at a very low price.