India   All India  02 Apr 2018  No biscuit distribution: VK Singh on exgratia for Indians killed in Iraq
India, All India

No biscuit distribution: VK Singh on exgratia for Indians killed in Iraq

When asked about whether it was the centre or state govt responsible to compensate the families, Singh said, 'It is India's responsibility.' 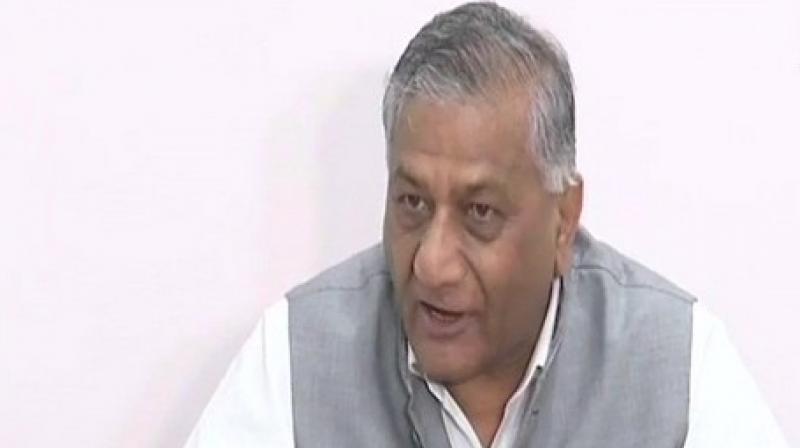 'We're very thankful to the Iraq government for not only cooperating but also simplifying the process for us to get our people back,' said Singh. (Photo: ANI)

Amritsar: The remains of 38 out of the 39 Indians killed in Mosul, Iraq by the extremist group Islamic State (IS), were brought back to the country by Union Minister of State for External Affairs Vijay Kumar Singh, who suggested that the Centre government, along with the State government were working on a plan to compensate the families of the deceased.

"We're very thankful to the Iraq government for not only cooperating but also simplifying the process for us to get our people back," said Singh, asserting on the fact that no stone was left unturned by the Indian government to retrieve the people alive.

Talking about the compensation the families would receive, he said, "Look, this is not a game of football, both the centre and state government are sensitive about the matter. The families were told earlier to give a list of their family members, along with their qualifications, who are most eligible for a job, and we will collaborate with the state government and make the adequate arrangements."

When asked about whether it was the centre or the state government responsible to compensate the families, he said, "It is India's responsibility."

"This is not like distributing biscuits, I do not have like a box of money in my pocket that I'll just declare the compensation right now, this matter concerns people's lives," he responded when asked whether he can give an estimate of the compensation the families will receive.

Congress leader Navjot Singh Sidhu claimed that the Punjab government declared an ex-gratia compensation of Rs 5 lakh, a job for one family member and the continuation of the monthly Rs 20,000 pension for the families of 27 of the 39 Indians killed in Iraq who were from Punjab.